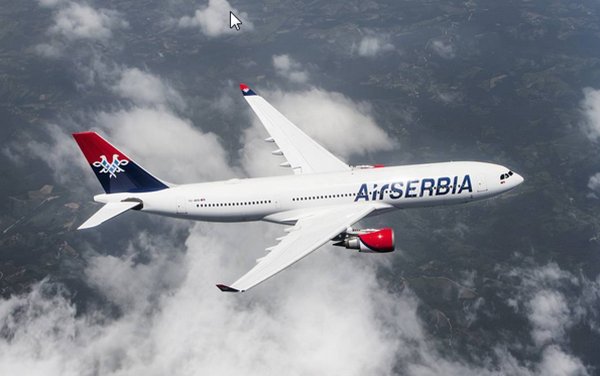 Air Serbia, the national airline of the Republic of Serbia, has named the Airbus A330 aircraft which will fly between Belgrade and New York after legendary Serbian scientist and inventor Nikola Tesla.

The name of the wide-body jet was officially unveiled at a special ceremony in Belgrade this morning.

Nikola Tesla (1856 – 1943) is celebrated as one of the greatest minds of the 20th century, and is credited with developing many inventions that have shaped modern society, including the alternating-current electricity system, radio technology, x-rays and early models of electric motors. He lived most of his live in New York.

Following the unveiling, the airline hosted an onboard tour of the Airbus A330 aircraft that will be deployed on the Belgrade - New York route from tomorrow to give journalists and reporters a first-hand look at the special wide-body jet.

During the visit, Serbian media had a chance to see the interior décor of the 254-seat aircraft as well as tour the passenger cabins, highlights of which include lie-flat seats in Business Class, menus inspired by classic Serbian cuisine, and inflight entertainment systems with monitors at every seat.

Dane Kondić, Chief Executive Officer of Air Serbia, said: “There is no one better to name our A330 aircraft after than Nikola Tesla, one of the most admired and influential Serbians in history.

“Billions of people around the world use his inventions daily and he had a close connection to New York, where he spent most of his life. It’s an honour to fly back to the city with his name proudly emblazoned on our A330.

“Tesla’s pioneering spirit and ingenuity closely resonate with Air Serbia’s drive to innovate and go beyond expectations when it comes to regional air travel.

“Along with our trade partners and the travelling public, we are counting down the hours until the first flight takes off for New York tomorrow, expanding our route network across the Atlantic and ushering in a bright future for our business.”

Siniša Mali, Chairman of the Supervisory Board of Air Serbia and Mayor of Belgrade, said: “The countdown for the first New York flight has officially begun, and in less than 24 hours, we will have a five- per-week flight connecting Belgrade and the ‘City That Never Sleeps’.

“This new air link will supercharge relations between Serbia and the United States, and as such, it is fitting that our A330 has been named after Nikola Tesla, the man who was responsible for so much progress in the 20th century.”

James Hogan, President and Chief Executive Officer of the Etihad Aviation Group and Vice-Chairman of the Supervisory Board of Air Serbia, said: “Air Serbia is about to take a huge step forward on its journey to become the leading airline in the region.

“With an A330 in its fleet and a strong network, the airline has laid the foundations for the success of its New York service and we look forward to the first flight tomorrow.”

Air Serbia continues to experience significant interest in its forthcoming service to New York with the launch of ticket sales at the International Tourism Fair in Belgrade, exceeding the airline’s...

Air Serbia, the national airline of the Republic of Serbia, and Air Europa have signed a codeshare agreement to provide guests with enhanced travel options between northern and southern Europe."Da...