This Sunday, May 15, 2022 at Calvi Sainte Catherine airport, Luc BERENI, Chairman of the Air Corsica Management Board and Pierre NEGRETTI, Chairman of the Balagne Commission of the CCI of Corsica, accompanied by elected officials from the CCI and representatives of the Calvi Tourist Office, gathered to celebrate the resumption of flights between Calvi and the United Kingdom.

Air Corsica had opened the lines between Corsica and London Stansted in 2018 by operating flights to Bastia, Ajaccio and Figari then, in the light of very encouraging results, had extended its offer from the second year, by offering, in 2019, flights towards Calvi. 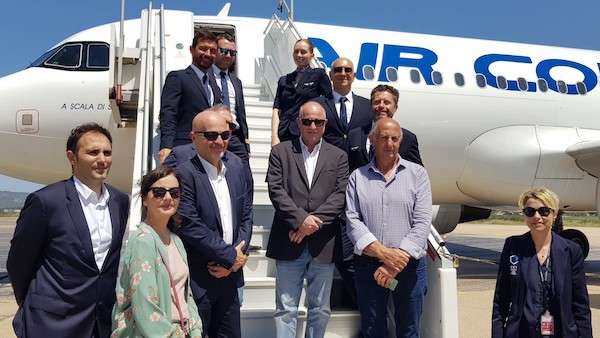 Wishing to optimize the marketing of these flights, in an economic context following the health crisis, the company has, in addition to the capacity intended for the individual public (in Corsica and the United Kingdom), sold upstream, part of the seats at the Tour Leading English operator in Corsica for 30 years, "Serenity" (Corsican Places), www.corsica.co.uk. The latter offers British customers all-inclusive products, designed in partnership with hoteliers in Balagne.
Public fares, accessible from the Air Corsica website (www.aircorsica.com) or through travel agencies in Corsica, start at €149 including tax one-way and include the free transport of checked baggage of 23 kg per person.

Network diversification at the heart of Europe: Air Corsica is returning to the center of Europe this summer by offering a program of twelve international routes across its entire network. Through it, four international lines are planned from Calvi, in regular flights: Austria (to Vienna and Salzburg), Belgium (to Charleroi Brussels South) and the United Kingdom (to London Stansted).

Luc BERENI, Chairman of the Board of Air Corsica, commented: "We are delighted to reopen the London-Corsica axis with this London-Calvi-Ajaccio flight, which allows us to reconnect our island to the United Kingdom and in particular from Balagne. This decision to resume our flights to London Stansted was taken in beginning of the year while a certain number of uncertainties still hovered over the current tourist season, hence our caution regarding the scheduling of the volume of seats on this line, which is more modest than in previous pre-Covid seasons, in 2018 and in 2019. Air Corsica's will is obviously to gradually increase the offer in order to continue the efforts undertaken in the promotion of our island and the influence of our company on the English market".

Jean DOMINICI, President of the CCI of Corsica, said: "We salute and thank the regional company Air Corsica for having reconnected the London/Calvi line, which generates British tourist flows to our Balagne destination. The opportunity to reconnect with this historic clientele and to retain them, we hope, for many years".


Loading comments for Air Corsica and CCI of Corsica announce the resume of Corsica-London flights ...