On March 24, 2021 we had almost two hours with the President and CEO of the Latvian airline airBaltic Martin Gauss. To be more exact, he held a public briefing gathering over 650 guests to give a clear overview how airBaltic is flying out of the crisis. Once again, we would like to thank him for this, for his clear explanation of how the company works during these unprecedented times and what airBaltic see for the future. As Mr.Gauss told, sometimes media are writing things about airBaltic without even asking responsible management anything related to question they have. So we are giving you the highlists from this webinar, so you would have all the information from the source! After the presentation Martin Gauss also answered all questions from the audience.

The key highlights from the webinar:

airBaltic was and will be an asset for Latvia. airBaltic is a strategically important driver for the Latvian economy,responsible for more than 2.5% of the Latvian GDP. In 2020, Covid-19 brought a 73% decline in passenger numbers for airBaltic, and the company’s operations were impacted significantly. In order to support the local economy, the government provided aid to all industries heavily affected by the crisis. With the planned IPO for airBaltic, the investment will be returned to the Latvian state in the form of sale of shares. airBaltic is ready to grow and has strong competitive advantage – new and modern fleet. One Airbus A220 aircraft can generate around 20 million euro revenue per year if utilized efficiently – meaning airBaltic in 2025 could produce revenue close to 1 billion euros, following the Destination 2025 CLEAN business plan.

airBaltic will fly out of the crisis thanks to its key assets: fleet, service excellence, strong team and strategy.

Fleet. airBaltic fleet, which consists of a single type Airbus A220-300 aircraft is the youngest and most modern fleet in Europe. Today airBaltic fleet consists of 25 A220-300 aircraft which is the right amount for the company to restart operations at full speed and become profitable in the highly competitive market. airBaltic has ordered in total 50 Airbus A220-300 of which 25 have been delivered and still holds 30 options for the same aircraft type. The Airbus A220-300 has performed beyond the company’s expectations, delivering better overall performance, fuel efficiency (20% lower fuel burn) and convenience for both passengers and the staff. In addition, at the moment it is the greenest commercial aircraft in the world, as it is the first aircraft to have a transparent declaration of the life-cycle environmental impact, helping to reduce CO2 and NOX emissions by 20% and 50% respectively. Also, the aircraft’s size with 148 seats is perfectly suited for airBaltic strategy and further development of short haul as well as for long haul flights. 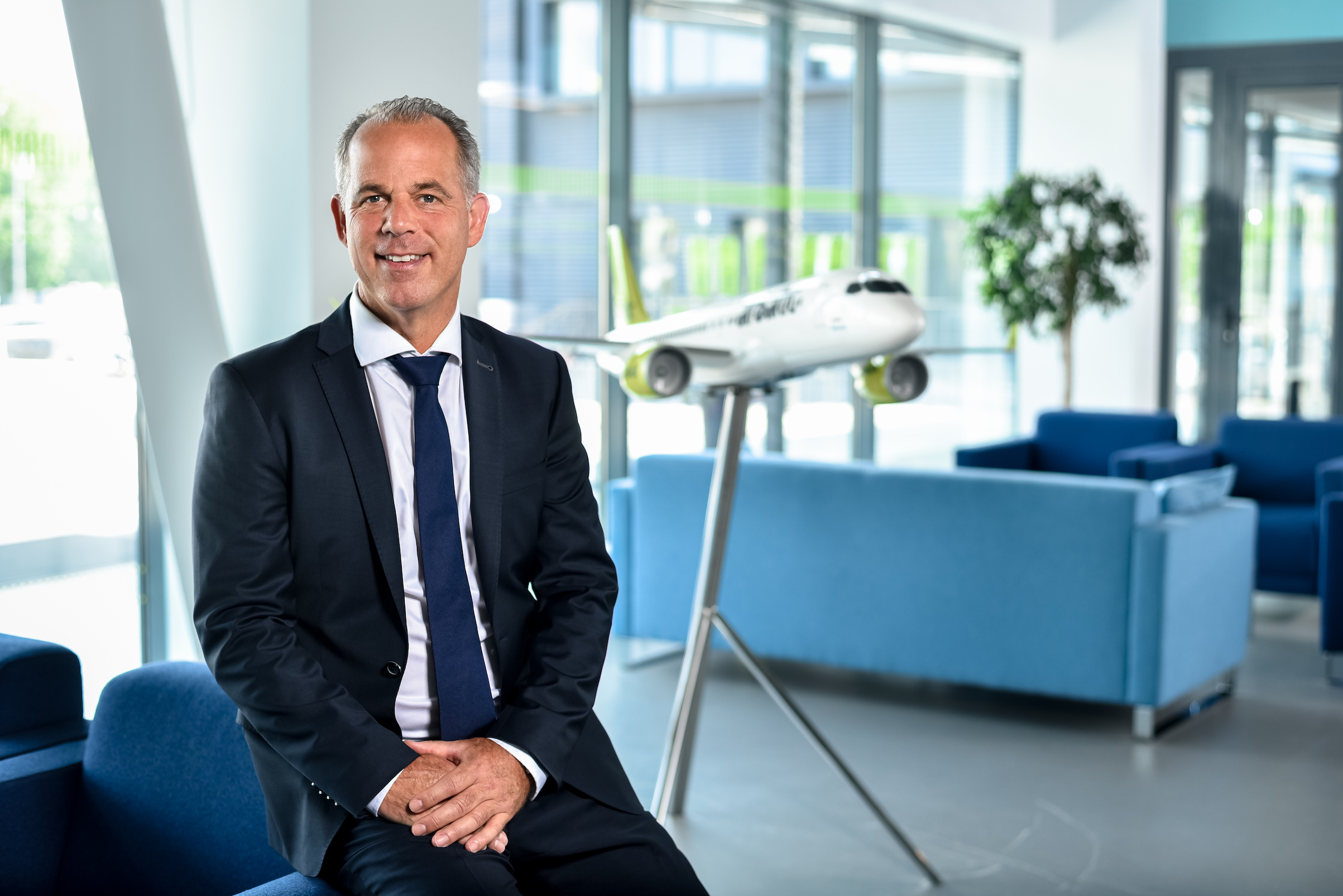 Excellence. airBaltic has demonstrated exceptional service in many areas over the years. airBaltic has been recognized as one of the most punctual airlines for several years in a row. In addition, airBaltic has been driving the innovations. In 2014, airBaltic became the world’s first airline to accept Bitcoin payments for its flight tickets. Recently airBaltic and LMT announced a collaboration within the drone industry. Further airBaltic excellence is shown with the market leadership in the region – airBaltic is the main connectivity driver for the Baltics with its highly efficient hybrid model that offers full business and economy class travel options. On top of that, this year airBaltic became the first airline in the world to receive the five–star COVID-19 safety rating by Skytrax, demonstrating a strong and safe product even during the global pandemic.

Strong team. The core of airBaltic success is the highly motivated workforce, experienced international and local management. airBaltic is proud to have maintained full gender equality in the number of employees, as well as managers and top managers of the company. In addition, airBaltic has been consistently ranked among the best employers in various nationwide studies and surveys since 2007 and is the best employer in the Transport and Logistics Sector. airBaltic has the experience of 25 years in the industry and during this time has worked itself out of the past crisis to be a very successful company. With this team and experience, airBaltic will be taken out of this crisis.

Clear strategy. airBaltic has a clear strategy. It was exactly the business plan Destination 2025 CLEAN, which was the base for the European Commission to approve the Latvian state decision to support airBaltic.  In addition, the airBaltic team can adapt to the rapidly changing market promptly and adjust the network to different scenarios. airBaltic is a point to point carrier via Riga hub with a wide range of codeshare partners.

Another strong point for airBaltic’s success is the trust expressed and seen in airBaltic by the capital markets. On July 24, 2019 airBaltic placed a 200–million–euro issue 6.75 percent 5-year bonds. The transaction was well received by the international and local investor community, resulting in a final allocation to more than 100 investors from 25 countries and the demand for the securities exceeded supply. airBaltic is also preparing for an IPO which will support the company’s future growth and return the Latvian state’s investment in the form of sale of shares.

Last steps out of the crisis. In order for the aviation industry to restart, the vaccination levels need to increase in Europe and Latvia. Meanwhile it is important to work on rules and joint regulations like digital health pass (green pass, IATA travel pass) for more confident travelling. This planning and chosen approach will be the base for the success of airBaltic and with that – the success of the whole of Latvia. airBaltic is supporting this process and already in April will launch the trial of IATA Travel Pass. airBaltic is continuing to connect the three Baltic countries with the rest of the world. Loading comments for airBaltic CEO Martin Gauss on how airBaltic will fly out of the crisis...