American Airlines builds on commitment to sustainable fuels with Kuehne+Nagel

American Airlines has reached an agreement in principle with Kuehne+Nagel to allocate a portion of the carbon reduction benefit the airline generates through its use of sustainable aviation fuel (SAF) to the logistics company, one of American’s leading cargo customers.

The agreement in principle is believed to be the largest SAF collaboration between a freight logistics company and an airline, based on the 3 million gallons of fuel it covers. This volume equates to a reduction in lifecycle carbon emissions from air travel of nearly 26,000 metric tons of carbon dioxide (CO2) over three years, the equivalent of a Boeing 787-9 passenger aircraft flying carbon neutral around the world 25 times. Importantly, the reductions in carbon emissions are accounted for within the aviation sector.

“Partnering with Kuehne+Nagel as part of our effort to reduce the impact of aviation on our planet has been an incredible example of the kind of collaboration that will drive real change,” said Jessica Tyler, President of American Airlines Cargo and Vice President of Operations Innovation & Delivery. “This strategic, market-based solution will help create a cleaner supply chain and is aimed at accelerating our transition to a low-carbon future.”

The agreement in principle with Kuehne+Nagel follows a similar agreement between American and Deloitte. Each such agreement is a model the airline hopes can be adopted more widely as a way to reflect demand for sustainable aviation fuel, build the market and quicken the industry’s transition from fossil-based jet fuels to more sustainable alternatives.

“The demand for environmentally friendly air logistics services is certainly on the rise,” said Yngve Ruud, member of the Management Board of Kuehne+Nagel, responsible for air logistics. “Through the innovative collaboration with American Airlines, we are pleased to support our customers’ sustainability ambitions and contribute to the development and widespread use of alternative aviation fuels. We encourage all the industry stakeholders to join us in bringing carbon-neutral flying one step closer.”

American has been taking delivery of SAF at San Francisco International Airport since last summer and has committed to using 9 million gallons of SAF over the coming three years. The SAF American is using in its operation is produced from waste fats and reduces lifecycle CO2emissions by 75% compared to traditional jet fuel. Since SAF meets stringent ASTM aviation fuel specifications, all aircraft and engine manufacturer operational procedures and limitations are identical to those for regular aviation fuel. 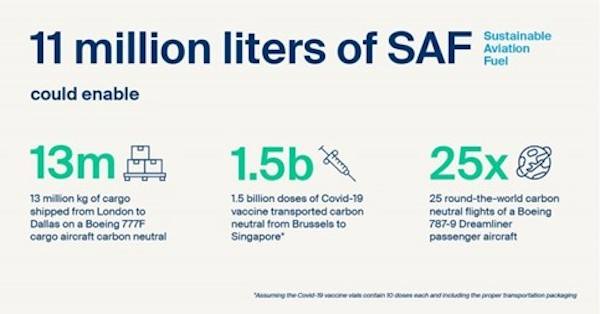 Loading comments for American Airlines builds on commitment to sustainable fuels with Kuehne+Nagel...