Regular flight operations at Austrian Airlines are suspended since March 18, due to the Corona crisis. The Austrian national airline has parked roughly 70 aircraft at Vienna Airport since then. However, a large part of the long-haul fleet was given a new purpose: The aircraft now transport air cargo, primarily from China and Malaysia to Austria. For this purpose, Austrian Airlines has already used the space on the aircraft seats in the passenger cabin in recent weeks, in addition to the cargo capacity in the aircraft belly. Due to the strong demand, the red-white-red airline has initiated the necessary certification process for the temporary conversion of passenger aircraft into cargo planes. Yesterday the conversion of the first of two B777 started at Austrian Technik in Vienna.

The removal of 270 of the 306 passenger seats from all travel classes has started with the aircraft bearing the registration OE-LPC and is scheduled to be completed on Wednesday, April 29. The conversion of the second long-haul jet with the registration OE-LPA will start on May 3 and is scheduled for completion on May 7. The dismantling of the Economy, Premium Economy and Business Class seats will take about 500 man-hours per aircraft and increase the cargo capacity of the Austrian jets by about 35 per cent. The cargo volume that can be transported in the aircraft belly as well as in the passenger cabin will thus be increased from around 210m3 to up until 280m3. 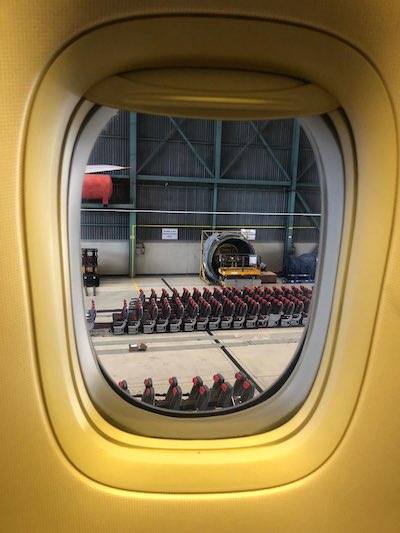 "The demand for cargo transportation, especially for medical protective equipment, is enormous. We are now making room for more cargo on our long-haul jets. This will bridge the time until our passenger business starts up again," explains Austrian Airlines Chief Operating Officer Jens Ritter this step. "As soon as the demand for travel picks up again, we can convert the aircraft back into passenger planes at any time", he adds.

Around 50 cargo flights completed, 45 more flights planned
From Xiamen, Penang and Shanghai, the Austrian carrier has already operated around 50 cargo flights. In cooperation with freight specialists Lufthansa Cargo and time:matters Austria, around 770 tons of relief goods for medical care were brought to Austria. 45 further flights are currently in the planning stage.

At the moment, Austrian's cargo flight schedule includes a daily connection to Shanghai as well as regular flights to Xiamen and Penang. From the beginning of May, the cargo offering will be expanded to include flights to Beijing and Shenzen. Further destinations in China, but also in other countries, can be examined and included on short notice.