A global air charter specialist has begun a campaign to highlight the wide range of job roles in aviation, in a bid to help address gender imbalance in the industry. As the world prepares to mark International Women’s Day, the work of women at Chapman Freeborn is being celebrated – and their stories used to inspire others. Aviation has always been an attractive career, offering employment that can provide a tantalising combination of travel, technology, big business and even an insight in the world of fame and celebrity. But the Workforce Report from Women In Aviation International shows that 70 per cent of the sector’s workforce are men, 93 per cent of pilots are male – and that women are outnumbered in every role other than cabin crew.

At Chapman Freeborn 45% of employees are women and the company has begun an online campaign to highlight the vital role they play.

Carol Carini, Group Communications Manager at Chapman Freeborn, said: “There’s no hiding that aviation as an industry is male dominated - but things are changing.

“We all need to do more to show women how exciting the industry is to work in and how many different roles it offers.

“When people think about jobs in aviation they probably think about pilots and cabin crew, but there is so much more to it than that.

“Roles are as varied as being a Cargo broker or a broker for passenger charter or private jet hire to being a ground handler. Or from working in HR or PR & Marketing, to having a role in aircraft maintenance to name just a few!.”

Here are some of their stories of women working at Chapman Freeborn to celebrate International Women’s Day:

“I have a fear of flying – but it hasn’t stopped me having a career in aviation, so that shows it’s available to everyone!

“My first connection with the industry came when I was six years old in Dhaka, Bangaldesh and met a blonde Belgian boy, aged nine, who was obsessed with aeroplanes.

“His eyes permanently faced the sky and we became firm friends.

“Twenty-one years later we met again, in London for lunch. He had already started his career in aviation cargo and was still turning his eyes to the sky. We dated long distance for two months and then I moved to the UK – and a year later we were married.

“Eventually I joined him in the industry, at Chapman Freeborn as a trainee charter broker, and I’ve never looked back. As soon as I saw the view from the office, looking directly over the London Gatwick runway, I knew I was in the right place!

“Over the years I’ve seen a lot more women get involved in aviation, but we still need more.

“I would like female role models to be advertised to young women in early education. This is where the future lies - and examples of female success in the industry can really help.

“I have worked in a variety of industries including education, recruitment, construction and insurance. None of these have interested me like aviation does.

“Aviation is fast-paced, ever-changing and complex, which makes my role thought-provoking and a very rewarding role to be in.

“My role has a big focus on attracting and retaining top talent and I really believe it’s important for all leaders to work together to support gender equality and diversity.

“There are a lot of opportunities across a wide range of job roles in aviation that not only allow you to find your niche but provide opportunities to try new roles that allow your career to grow.

“If you want to work in an industry that challenges you, provides you with variety and offers opportunities that take you out of your comfort zone, then aviation is the place to be."

“I’ve always been in travel, starting with working at a Tour Operator looking after tasks such as the mail, printing tickets as well as writing tickets.

“Now I am responsible for all operational aspects within the passenger charter business for the group of Chapman Freeborn companies. So, a bit different!

“It’s always been a male dominated industry, but things are changing.

“I had great support in my career from women in aviation, especially at Chapman Freeborn, who have inspired me to excel in my career”

“I feel that women are missing out because it’s a great industry to work in. There is great camaraderie. It’s a tight knit community, and it’s a lot of fun. They say once you’re in aviation it’s very hard to leave and that’s certainly true!

“My message to young girls dreaming of working in aviation is work hard and stick to your dreams. Despite it being a male world, know that you are just as capable and able to progress and excel as anyone. If I can do it then you certainly can!”

“My love of aviation goes back to when I was a little girl and my dad was part of the Bulgarian Air Force. I was even born on the country’s Air Force Day, October 16!

“I remember lots of military aircraft flying over my house on my birthday one year and I found that so exciting.

“I could never afford to go through pilot training when I was younger, even though it was something I wanted to do. However, as I grew up, I discovered there are plenty of other paths in aviation to pursue instead.

“It’s a wonderful industry to be involved in. There are so many paths to take and it’s all very exciting. Not only that but it’s a global industry and yet it feels like one big family.

“I would say to girls: ‘explore all the different roles you can do and don’t think that being a flight assistant or pilot is the only way’. The sector can be very flexible and accommodating to personal circumstances, so don’t let fear get in the way!” 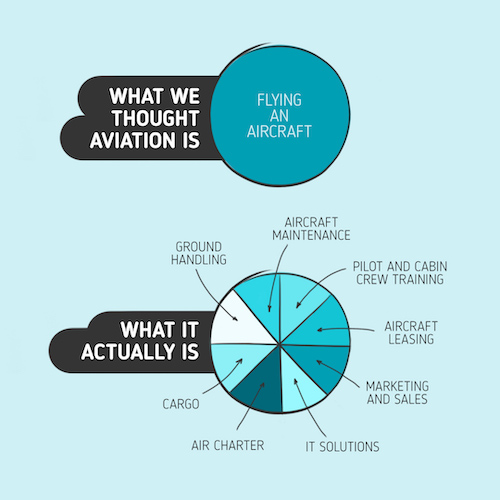