easyJet’s partner Wright Electric has revealed the latest milestone in its engine development programme which is working towards the development and certification of the first commercially viable, zero-emissions single-aisle aircraft. Wright has now demonstrated the first inverter system of its kind for large zero-emissions aircraft. Whether a future aeroplane is battery-electric or powered by a hydrogen fuel cell, an inverter is a key component in medium voltage aircraft electric systems. Its purpose is to convert the DC power from batteries to the AC power required by the propulsion system’s electric motors.

Designed to be scalable from 500 kW to 20 MW systems, the Wright inverter targets the following levels of performance:

The inverter now proceeds to the next phase of development including integration with an in-house developed 2 MW motor, high altitude chamber testing, and qualification for flight readiness.

This next milestone is part of the ongoing development of zero-emission and low-emissions technology for a single-aisle airliner designed for flights up to 800 miles, which would cover around 50% of easyJet’s current network. Wright Electric is targeting entry into service of its flagship Wright 1 aircraft in 2030.

David Morgan, Director of Flight Operations for easyJet commented: “We welcome this latest development as it marks another crucial step forward for our partner Wright Electric on this journey towards the development and introduction of commercial zero-emission aircraft technology which would be a game changer for short haul aviation.

“We know it is extremely important to our customers that we operate as sustainably as possible, and everyone at easyJet are committed to collaborating on the development of these new technologies, aiming to be  one of the first adopters when they come to market."

Jeff Engler, CEO of Wright Electric said: “The level of performance demonstrated with our new inverter will become the baseline for any new electric aircraft and is a key technology in our megawatt system,” said Jeff Engler, CEO of Wright. “In January 2020, we announced the start of our megawatt scale electric motor program for a single-aisle commercial airliner. Over the coming months, Wright will be making additional announcements regarding the progress of our integrated propulsion system. Zero-emissions commercial aircraft are the future, and Wright is focused on delivering on the promise.”

easyJet has been working with Wright Electric in its mission to support the development of an all-electric aircraft programme as part of a shared ambition to de-carbonise aviation. Currently, Wright is engineering electrical systems at the megawatt scale which will be necessary for commercial flight for its 186 seats zero-emission aircraft.

Despite the impact of the pandemic, the last year  has seen more technological breakthroughs including the first battery-powered all-electric, zero-emission plane certified by EASA – the Pipistrel Velis Electro, in Slovenia and the UK’s first successful test flight of a six-seater hydrogen-electric aircraft which took place at Cranfield.

easyJet is the first major airline to operate carbon neutral flights across its whole network. The airline is achieving this goal by offsetting the carbon emissions from the fuel used for all of its flights. The airline sees this as an interim measure until new technology becomes available to decarbonise aviation. In the meantime, easyJet remains focused on operating its fleet as efficiently as possible using modern, fuel efficient engines which are quieter and burn less fuel. Since 2000 easyJet has reduced the carbon emissions for each kilometre flown by a passenger by over one-third (33.67%) and has a target to reach a 38% reduction by 2022. 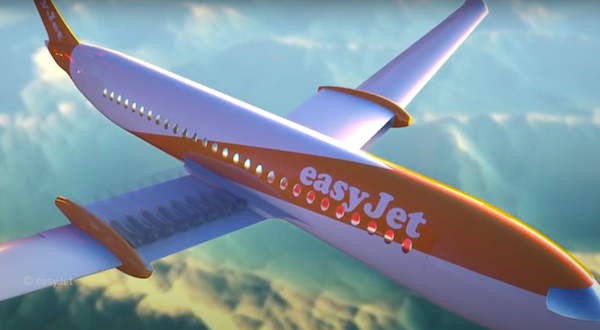