Europe’s largest airlines have important self-help options open to them to help stave off the liquidity crisis brought on by the Covid-19 pandemic despite the spectre of mass bankruptcy hanging over the industry and calls for urgent government assistance. Scope Ratings says the longer-term challenge for surviving airlines is that they will be operating in a much changed and less favourable economic environment than before the crisis: a smaller travel and tourism market with less buoyant growth.

“The Covid-19 crisis is proving a severe test of airline strategy in recent years, with the industry divided between airlines which pursued conservative financial policies, keeping cash on hand as much as possible, and those which favoured returning cash to shareholders through dividends and share buybacks and/or borrowing to expand fleets aggressively,” says Werner Stäblein, analyst at Scope.

Companies which have preferred to own their own aircraft to maximise operating flexibility – such as easyJet PLC, Deutsche Lufthansa AG, Ryanair PLC – are looking relatively resilient as they did during the global financial crisis. These three carriers, together with Air France-KLM SA and British Airways-parent IAG PLC, have a more than 50% share of the European air-travel market.

However, even these carriers’ balance sheets are under intense pressure. The airlines have suspended most, if not all, of their passenger operations. Lufthansa - downgraded to BBB- from BBB (31 March) and under review for a possible further downgrade – has grounded 90% of its passenger fleet. Easyjet has grounded its entire fleet.

One is active management of liabilities from “unused flight documents”. Flight tickets, ordinarily paid in advance of the flight, may have to be refunded if the booked flight is cancelled. To retain this cash, Air France-KLM and Lufthansa, for instance, have offered generous rebooking options and issued rebooking vouchers.

“These measures should not be underestimated: Lufthansa had EUR 4.0bn of liabilities under unused flight documents at the end of 2019 versus total gross financial debt reported of EUR 6.8bn of which EUR 6.1bn were long-term financial obligations,” says Stäblein. 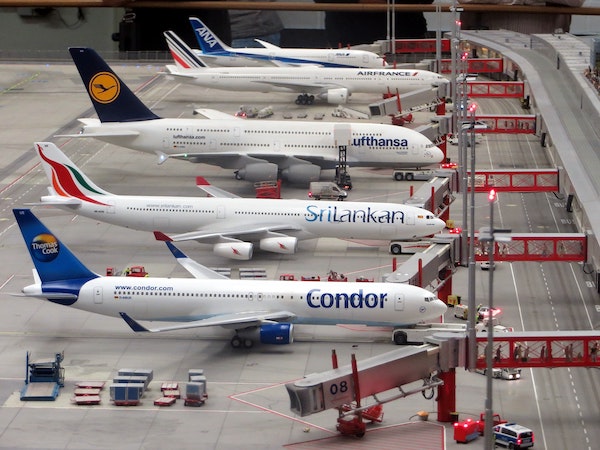 The second is scaling back of plans to modernise or expand fleets of passenger aircraft.

“Airbus and Boeing were set to deliver around 430 aircraft in Europe this year – assuming no extended grounding of the US plane maker’s B737MAX aircraft over safety concerns but it now looks unlikely many of those deliveries will be made,” says Chammem. Lufthansa, for example, plans to “drastically” reduce its EUR 3.0bn capital-spending budget for 2020.

Europe’s leading airlines will survive the crisis, partly through cash-conservation measures like these, but will have to adjust their growth ambitions and day-to-day business to a much less dynamic future business environment.

“The airline industry is a ‘GDP-multiplier’ industry,” says Stäblein. Historically, global air passenger traffic recovered from short-term and long-term shocks, maintaining a long-term growth trend of about 1.5x-2.0x GDP growth. Substantial declines in real cost of air travel, in turn a reflection of the fiercely competitive nature of the industry, have supported this secular growth. “The GDP-effect will very likely work in the opposite direction in a prolonged global economic downturn,” says Stäblein.

“What makes matters worse is the importance of travel and tourism as a key contributor to GDP worldwide,” says Chammem. Travel and tourism contributed about USD 9tr to global GDP in 2019, up from USD 5.8tr in 2007 before the global financial crisis and equivalent to more than 10% of global GDP.