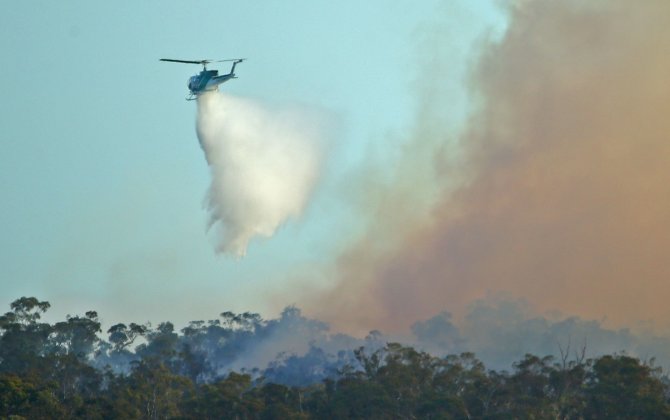 As bushfire season gets under way, with houses lost in Victoria and a man charged with arson in NSW, Casa aims to keep skies clear for firefighting

Anyone who flies a drone near a bushfire could face a $9,000 fine, the Civil Aviation Safety Authority (Casa) has warned.

As part of its “Don’t go there” campaign, the authority reminded people that unmanned aerial vehicles risked colliding with firefighting aircraft or firefighters on the ground.

Aerial firefighting might also have to be suspended while a drone was located, meaning a fire could get out of control, Casa said.

A New South Wales man is set to face court after allegedly lighting fires and resisting arrest in the state’s Hunter region.

On Saturday afternoon, firefighters were called to the Pacific Highway at Belmont to put out fires in a stormwater drain and then other fires in nearby bushland.

After observing a man nearby, the officers contacted police who found a 26-year-old man in nearby school grounds and, after a short foot chase, arrested him.

The man has been charged with two counts of intentionally lighting a fire, resisting arrest and trespassing. He was refused bail and was due to appear in Newcastle local court on Sunday.

States have already begun preparing for the bushfire season, with controlled burns and vegetation clearing around power lines in Western Australia.

The Department of Parks and Wildlife burned about 147,000ha last season, which means 35% of department-managed land in the south west region has a fuel age of less than six years.

The environment minister, Albert Jacob, said a further 50,000ha had already been burned this financial year.

Western Power has also cleared vegetation from power lines and is improving networks.

The emergency services minister, Joe Francis, said the campaign was a reminder for residents to prepare their properties for summer.

“Bushfires can happen anywhere, anytime, and it’s essential everyone at risk has a survival plan and do all they can to protect themselves, their families and their property,” he said.

Last week bushfires raged in several Australian jurisdictions. At least five houses were lost to a fire in central Victoria which burnt more than 300,000 hectares. On Friday the federal environment minister ordered an investigation into a fire at Kadadu national park, sparked by a controlled burn on a uranium mine site.