“Frontier and Pratt & Whitney share a common mission towards evermore sustainable aviation,” said Della Posta. “At Pratt & Whitney, we seek not just to be the best engine supplier in the world, but also the best for the world. I’m honored to represent the people of Pratt & Whitney, and I’d like to thank them and the thousands of Frontier employees who are doing their part to move aviation toward net zero carbon emissions by 2050.”

Maria joined Pratt & Whitney Canada in 1985 and has been instrumental in driving a significant business model transformation, customer-centric culture and focus on sustainability. Based in Montréal, Pratt & Whitney Canada has been leading the charge in sustainable aircraft propulsion, including hybrid-electric systems and sustainable aviation fuels. The unit supplies engines and auxiliary power units (APU) for aircraft and helicopters of all sizes and missions, with more than 15,000 customers around the world.

Barry Biffle, president and CEO, Frontier Airlines, commented: “Frontier is proud to take delivery of our second A321neo, powered by Pratt & Whitney’s GTF engines. As America’s Greenest Airline, these revolutionary engines are helping us to achieve our very important sustainability goals. We also commend Pratt & Whitney employees for honoring a groundbreaking female leader through their aircraft naming choice and for recognizing the importance of shining a light on women trailblazers in aviation.” 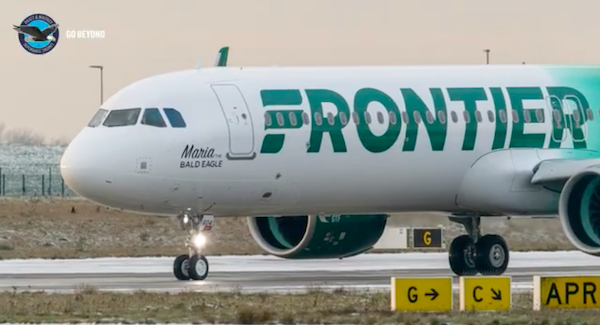 This aircraft marks the second of 144 A320neo family aircraft – 134 purchased and 10 leased – for which Frontier has selected the GTF engine. The first, “Frederick the Bald Eagle,” was added to the Frontier fleet in October 2022 in tribute to Pratt & Whitney founder Frederick B. Rentschler. Frontier will soon reveal the story behind a third aircraft, also named after a Pratt & Whitney aviation pioneer in recognition of the companies’ relationship.

Prior to GTF-powered A320neo family aircraft, Frontier and Pratt & Whitney share a history going back to the airline’s launch in 1994, when it commenced operations with a Boeing 737-200 aircraft with JT8D engines. The airline later operated Embraer E170 and E190 aircraft, each equipped with an APS2300 APU from Pratt & Whitney Canada.

Rolls-Royce has conducted successful tests of a 12-cylinder gas variant of the mtu Series 4000 L64 engine running on 100% hydrogen fuel. The tests, carried out by the Power Systems business unit,...

NASA has selected Boeing and its industry team to lead the development and flight testing of a full-scale Transonic Truss-Braced Wing demonstrator airplane. The technologies demonstrated and...

ARGUS International announced he addition of ground tracking to their TRAQPak FBO software. This new addition to ARGUS' TRAQPak software provides real-time tracking on the ground, so sub...