Wizz Air announced its new international low fare route from Olsztyn Mazury Airport to Bremen, Germany. The newest WIZZ service will be operated with two weekly flights (Wednesdays and Sundays). Seats on the new route are already on sale and can be booked on wizzair.com or Wizz Air’s free app from as low as PLN 39*.

Bremen is a major cultural and economic hub in the northern region of Germany. It is home to dozens of historical galleries and museums, ranging from historical sculptures to major art museums, such as the Übersee-Museum Bremen. Bremen is also one of the largest seaports and centers of seaborne trade in Germany. The city has also long been an important cultural center, boasting numerous top attractions and plenty of fun things to do. The new route will strengthen business relations between Poland and Germany, while stimulating the local aviation and tourism industries.

Wizz Air’s first flight took off from Szymany in 2016 and since then, the airline carried more than 182 000 passengers becoming the leading airline at Olsztyn-Mazury Airport.

The new service will connect Masuria region with Germany with two weekly flights. With the new route, Wizz Air this year offers almost 100 thousand seats on sale on its three Olsztyn-Mazury routes, representing an 84% growth year over year. Now Polish customers can reach London in the UK, as well as Dortmund and Bremen in Germany from Olsztyn Mazury. 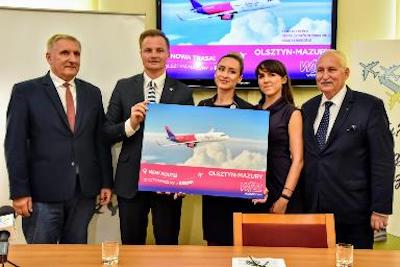 Paulina Gosk, Corporate Communications Manager of Wizz Air, said: We are happy to celebrate this memorable day at Olsztyn Mazury Airport with the announcement of our third service from Olsztyn Mazury. Wizz Air’s low fares landed in Masuria in 2016. To date over 180 thousand customers have flown with WIZZ to and from Szymany, while enjoying our excellent onboard service. Underlining our commitment to the region and our Polish customers, today we have added our third exciting route to Bremen in Germany. We look forward to continuing our fruitful partnership with the airport and remain committed to bringing even more opportunities to Masuria. Our dedicated crew looks forward to welcoming all passengers on board one of our aircraft with a smile!”

Thrive Aviation was awarded the coveted Platinum safety rating in an upgrade to their longtime Gold status, after completing an on-site audit with ARG/US' standards team. The review is an in-depth...