Bruno Chiarelli, Executive VP MRO, Safran Landing Systems: "Gulf Air is a very important customer for the MRO Division of Safran Landing Systems and by awarding this contract to our Gloucester facility, for six A321 and one A320 landing gear shipsets over the next five years, Gulf Air has confirmed its confidence in the quality and performance of our network.”

Captain Waleed AlAlawi, the Acting Chief Executive Officer of Gulf Air, said “the landing gear is one of the most critical equipment and it is very valuable to be able to work with Safran Landing Systems (SLS), which is one of the leading maintenance organizations for the gears in the industry. As the original equipment manufacturer (OEM) of the A321 gears, Safran Landing Systems has a deep knowledge of its products, and it is this aspect which will ensure highest standard of safety, quality and maintenance standards for Gulf Air. We are looking forward to working closely with SLS on this project.” 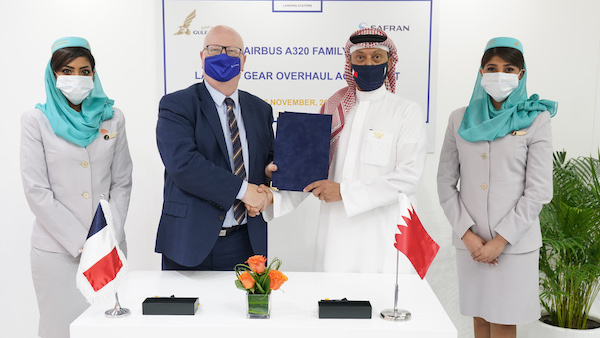 Gulf Air, the national carrier of the Kingdom of Bahrain, commenced operations in 1950, becoming one of the first commercial airlines established in the Middle East. The airline operates scheduled flights from its hub at Bahrain International Airport to cities in Europe, Middle East, Africa, Indian sub-continent and the Far East. Gulf Air is rated Five Star Major Official Airline by APEX, a rating program that is based solely on certified passengers’ feedback. This milestone for Gulf Air is a testament to the success of its “boutique” strategy and the ongoing enhancements to its products and services.

Safran Landing Systems Services UK Ltd is a world leader in landing gear MRO. It has over 220 employees specializing in the repair and overhaul of landing gears and associated components for single-aisle, military and regional aircraft. The center started its activities in 1997 and over +1000 shipsets of A320 family landing gears have been revised there, to date.

MRO activities draw on our Landing Life™ support and services offer, which covers all Safran Landing Systems' after-sales business and aims to provide a responsive, reliable and good-value service.

Loading comments for Gulf Air and Safran Landing Systems signed landing gear MRO contract for six Airbus A321 and one A320...