JetBlue unveiled a reimagined version of its Mint experience featuring a bespoke version of the revolutionary VantageSOLO from Thompson Aero Seating: the world’s first fully flat bed for single-aisle aircraft.

The new seats are part of JetBlue’s first major design overhaul of Mint, which will launch on the airline’s highly anticipated London flights this summer. A smaller layout will debut on a limited number of flights between New York and Los Angeles in 2021.

An entirely customised version of Thompson Aero Seating’s original Vantage seat, JetBlue’s Mint suites on its current Mint aircraft have been so successful since their introduction in 2014, that JetBlue has entrusted Thompson Aero Seating as its partner for this next evolution of its Mint product. The VantageSOLO was originally conceived by creative design agency Factorydesign for AIX 2015. Since then, it has been developed by Thompson Aero Seating specifically in response to the rapidly emerging medium- to long-range market now being serviced by a new generation of single-aisle aircraft.

Initial discussions began with JetBlue in mid-2016 and the programme was awarded at the end of that year. Thompson Aero Seating has been working with the JetBlue team since that time to realise a fully bespoke version of the VantageSOLO seat. This includes all seats having suite doors – the first all-suite-door business-class cabin on an A321.

Neil Taggart, Vice President & General Manager at Thompson Aero Seating, said: “We are proud to be the first in the market who acknowledged the single-aisle trend. The arrangement of the VantageSOLO is quite ground-breaking on this type of aircraft. From

only a 33” seat pitch, it offers a fully-horizontal flat bed with direct aisle access for every seat. For JetBlue’s reimagined Mint, we have configured this with a fully functioning suite door, offering an exclusive business class seating experience normally only the reserve of a wide body cabin.”

Collaborating under AVIC Cabin Systems (ACS), AIM Altitude worked with Thompson Aero Seating to seamlessly integrate the premium front-row monuments. The forward monument has self-service water and snack options, as well as fold-down tables and tablet stowage. In addition, an articulating guest seat is linked with the movement of the VantageSOLO seat to create an expansive sleeping or lounging surface. Featuring smooth lines and sophisticated comfort, the monument includes a rear-facing padded monitor panel and vertical pull-out table above an outboard sofa. The surface styling features unique trim and finish colours and materials, including a fully bespoke feature light and customised thermoplastics from Kydex.

The bespoke styling and features for JetBlue include:

Andy Morris, VP Commercial of AVIC Cabin Systems concluded: “We have very much enjoyed working once again with the team at JetBlue to bring to market this industry-leading product to their popular Mint experience. The seat and monuments include a huge array of exclusive and distinctive features, offering JetBlue’s customers real added value. The resulting suites are quite remarkable for a single-aisle aircraft.” 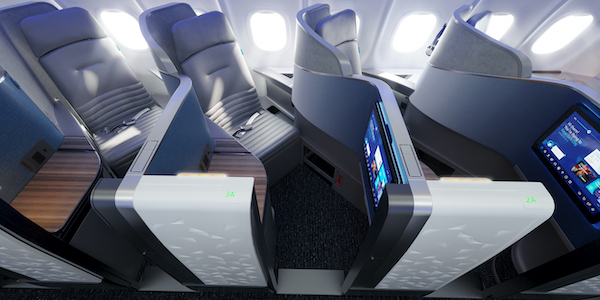