Etihad Airways, the official airline partner of Special Olympics World Games Abu Dhabi 2019, unveiled a striking new livery at a special event held at its Engineering hangar, to promote the Games which will take place in the nation’s capital between 14– 21 March.

The livery was unveiled to the delight of the four athletes who were present to see their images emblazoned across one of the airline’s Boeing 787-9 Dreamliners. The four UAE athletes include swimmer Omar Al Shami, runner Hamda Alhosani and bowlers Saleh Almarri and Mariam Al Hosani. The special decal was designed and printed in-house by the airline’s own creative team and applied by technicians at Etihad Airways Engineering facilities in Abu Dhabi.

Robin Kamark, Etihad Airways Chief Commercial Officer, said: “We are honoured to support the Special Olympics World Games Abu Dhabi 2019 and to unveil this very special new livery in recognition of the greatness of the Games and in celebration of the achievements, commitment and determination of the incredible athletes who will participate. This aircraft will continue to fly long after the Games and is just one of the ways the legacy will live on. It is our hope that as this aircraft travels the globe, it will convey a message of hope and inclusion, recognising the UAE’s Year of Tolerance.?

The Presenting Partner of the Special Olympics World Games Abu Dhabi 2019, ADNOC, is playing a major role in guaranteeing the success of the Games. As a valued partner of Etihad Airways, the ADNOC corporate logo is also featured on the engines of the branded aircraft.

Ghannam Al Mazrouei, Director of the Human Capital and Administration Directorate at ADNOC, said: “ADNOC is very proud to be a presenting partner of the Special Olympics World Games. In collaboration with Etihad Airways today we unveil this livery to raise awareness of Abu Dhabi and the UAE’s hosting of the Games. The values that define the Special Olympics movement also define the UAE. This makes the UAE and Abu Dhabi the perfect hosts for an event that will inspire and empower people and whose legacy will ensure a real and positive impact for generations to come.?

Special Olympics World Games Abu Dhabi will be the largest sports and humanitarian event in the world in 2019. Over 7,500 athletes and 3,000 coaches, representing more than 190 nations, will participate in 24 officially sanctioned Olympic-style sports in world-class venues throughout Abu Dhabi and Dubai.

One of these competitors will be young Emirati swimmer Omar Al Shami, 15, who was delighted to see his image featured so prominently. Al Shami, who has been part of the Special Olympics UAE team since 2015, has previously won three gold, five silver and five bronze medals through his participation in Special Olympics Games and various other tournaments. He is hoping to add more medals to his impressive haul when he competes next month. Al Shami is a strong advocate for people of determination and looking ahead to March said:

“As an athlete of determination, I am proud to have worked with Etihad Airways on the Special Olympics livery campaign. The positive impact that meaningful partnerships like this have for people of determination is invaluable and I hope that more companies across the globe will follow suit.?

With March’s Games quickly approaching, it is expected that more than 20,000 overseas visitors will join tens of thousands of spectators from across the UAE to watch what is likely to be the largest global event ever staged in the UAE capital. Etihad Airways will fly in athletes, equipment, coaches, dignitaries and the media for the occasion, supported by Etihad Cargo. Airline staff will be working with the Special Olympics team to share hospitality expertise in order to deliver the best possible guest experience.

“This ceremony is a celebration of our national heroes competing in the UAE national team. We believe that each one of these initiatives be it sponsorship, today’s livery unveil or logistics support will come together to make the Games truly incredible?, continued Mr. Kamark.

Peter Wheeler, Chief Executive Officer, Special Olympics World Games Abu Dhabi 2019, said: “Today we recognise Etihad one of our official partners expressing its support for the upcoming Special Olympics World Games Abu Dhabi 2019. With Etihad flying to many countries around the world, the new livery will help raise awareness of the upcoming World Games across the globe. By carrying the faces of our athletes on its aircraft, Etihad are playing an important role in spreading the universal message of tolerance and inclusion in a creative and impactful way to audiences in airports and cities around the world.?

In the coming months, the branded aircraft is scheduled to fly to Amsterdam, Athens, Barcelona, Brisbane, Jeddah, Kuala Lumpur, Manchester,Riyadh, Shanghai, Tokyo and Zurich and other destinations on the global network.

The unveiling of the special livery demonstrates Etihad Airways commitment to the Special Olympics World Games Abu Dhabi 2019, following previous announcements that the airline would not only sponsor the event but also launch its very own employee volunteer programme. Etihad Airways employees who volunteer for the programme will continue to receive their full salary for up to five days out of the office to volunteer at the Games in March.

The Special Olympics World Games Abu Dhabi 2019 will take place between 14 – 21 March and you can find further information here: https://www.meetthedetermined.com/ 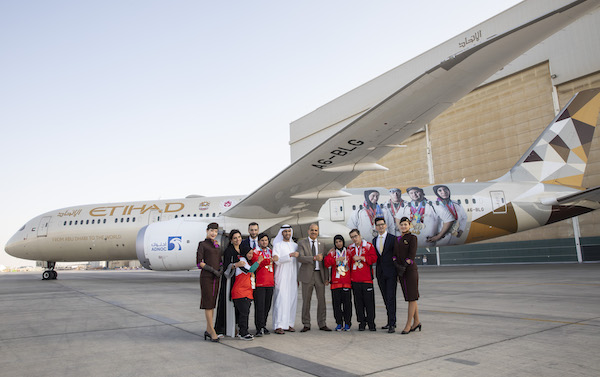