Norwegian received two coveted accolades at The Aviation 100 Awards held in Dublin, Ireland on Monday 20thJanuary. The Aviation 100 awards ceremony celebrates the years’ most outstanding performers in the aerospace industry. The top ten rankings for each category are based primarily on an industry survey vote, with nominations for each category also accepted and judged using a combination of points awarded for specific criteria.

Geir Karlsen, Norwegian Air Shuttle Chief Financial Officer, accepted the award for ‘CFO /Treasury Team of the Year’, which was awarded based on the best finance deal in past 12 months and the consistency of performance. Members of the Norwegian treasury team were also on hand to accept the award for ‘Equity Deal of the Year’ which was in recognition for the joint venture deal with CCB Leasing and Arctic Aviation Assets, represented by Hogan Lovells LLP. 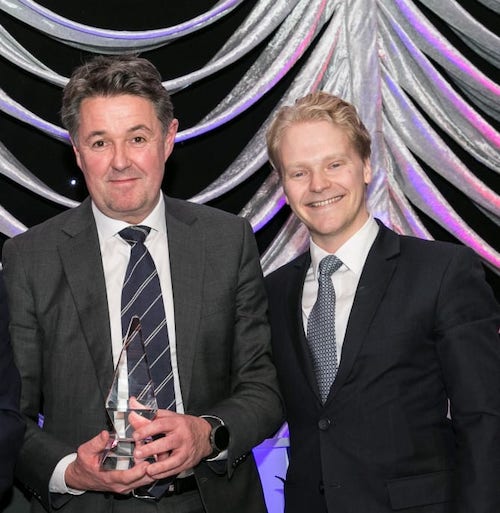 Geir Karlsen, CFO of Norwegian Air Shuttle, said: “During a challenging past year in the industry we have implemented a series of financial measures at Norwegian to ensure that we are delivering on our strategy of moving from growth to profitability. Throughout 2020 we will continue to focus on building a strong, sustainable and profitable business to benefit our customers, employees and shareholders. I very much appreciate the recognition that these awards clearly demonstrate in regards to the hard work and diligence of the entire treasury team at Norwegian and Arctic Aviation Assets.”

In Q3 2018 Norwegian announced a strategic move from growth to profitability and has since implemented a series of measures including an ongoing evaluation of the airline’s global route network in response to demand.

In the latter half of 2018 the airline launched #FOCUS2019 which looked at reducing costs throughout the business and has now been complemented by the launch of Program NEXT with a commitment to deliver a NOK 4 billion run-rate EBITDAR improvement by the end of 2021, as both top line and cost efficiencies are implemented. In addition, Norwegian’s monthly traffic statistics have consistently shown a reduction in growth with improved unit revenue and on time performance.

In 2019 Norwegian secured significant financial milestones that further strengthened the airline’s move to profitability. A fully underwritten rights issue of NOK 3 billion was announced in January. In May Norwegian Air Shuttle (NAS) and Norwegian Finans Holding (NOFI) entered into an IPR license agreement, giving NAS a one-time payment of NOK 150 million for NOFI’s right to use the Norwegian brand and the airline's logo in Europe outside the Nordics for the first five years of the agreement period. In September bondholders voted in favour of Norwegian’s proposed amendments to its two unsecured bonds NAS07 and NAS08 and in November Norwegian raised NOK 2.5 billion in gross proceeds through a private placement and a convertible bond issue of USD 150 million.

Clay Lacy Aviation is the first company to receive a 4AIR sustainability rating of Facilities Neutral, validating that the company’s private aviation facilities have been operating carbon neutra...