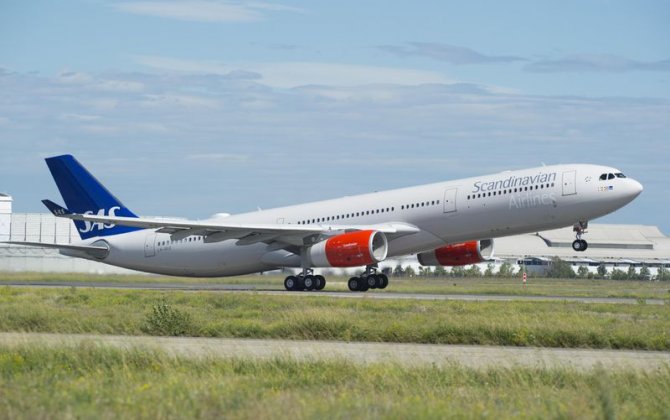 Scandinavian Airlines is the first European airline to receive the new A330-300 242-tonne Maximum Take-Off Weight (MTOW) variant. The aircraft was delivered to SAS during a ceremony held at Airbus in Toulouse, France. SAS has selected Rolls-Royce Trent 700 engines to power its new A330-300.

Launched in 2012 as Airbus’ latest evolution to the twin-engine widebody A330 Family, the increased take-off weight A330-200 and A330-300 incorporate a new aerodynamic package, engine improvements and an optional centre fuel tank (the latter for the A330-300 version). These upgrades allow for an extended range of up to 6,100 nautical miles while offering up to 2 percent less fuel burn.

"At SAS our vision is to make life easier for Scandinavia's frequent travelers and we are now delighted to welcome our passengers on board the new A330 Enhanced,” says Rickard Gustafson, President and CEO of SAS. "We are making substantial investments in our fleet and network which means that we by far have the strongest intercontinental offer to and from Scandinavia. In parallel we are able to significantly bring down fuel consumption with new aircraft coming in which will lower our costs and support our goals to reduce emissions."

“As first European operator of the 242-tonne A330-300, we look forward to seeing SAS enjoy the additional benefits delivered by this innovative aircraft’ said Christopher Buckley, Executive Vice President, Africa, Europe and Asia Pacific. “This longer-range A330 will fit seamlessly into SAS’s current fleet alongside their current A330s, and will pave the way for their A350s in the future. The A330s higher take-off weight allows the airline to fly new Asian routes, with an operational reliability of well over 99 percent. SAS’s passengers will be able to experience the best-in-class cabin comfort that only Airbus offers.”

The A330 Family seats 250 to 300 passengers (in a typical 3 class configuration) and includes Freighter, VIP, and Military Transport/Tanker variants. To date the A330 Family has attracted more than 1,500 orders and around 1,200 A330s are flying worldwide with over 100 operators. Ever since the original A330-300 entered service, its hallmarks are its very efficient operating economics, innovative cabin features, while offering passengers much wider economy-class seats than any competing aircraft. Moreover, with numerous product improvements and with an operational reliability of 99.4 percent, the A330 is the most cost-efficient and capable aircraft in its class.