Inmarsat announced that its award-winning GX Aviation inflight broadband solution is now available to customers onboard the first of Virgin Atlantic’s brand new Airbus A350 aircraft. The milestone was achieved earlier today, when Virgin Atlantic operated its inaugural Airbus A350-1000 flight from London to New York.​

Virgin Atlantic is scheduled to receive 12 Airbus A350-1000s over the next three years. All of the aircraft will be installed with GX Aviation, the world’s first and only global, high-speed inflight connectivity service delivered through a wholly-owned and operated network of high-throughput satellites. Inmarsat’s partner Deutsche Telekom, which is already the internet service provider on Virgin Atlantic’s Boeing 787 and Airbus A330 fleets, has also been selected for the same role on the airline’s new Airbus A350 fleet.

Philip Balaam, President of Inmarsat Aviation, said: “As one of the aviation industry’s greatest innovators, Virgin Atlantic is focused on providing a world-class experience onboard its aircraft. And that’s exactly what passengers can expect when flying on the airline’s brand new Airbus A350s from today. In addition to exciting new suites and social spaces, they will have access to a broadband service with fast, reliable and consistent coverage powered by GX Aviation.”

Gail Yates, Head of Inflight Services at Virgin Atlantic, said: “Today we celebrated an exciting milestone for Virgin Atlantic as the first aircraft in our new Airbus A350-1000 fleet took to the skies. We are always looking to raise the bar and provide our passengers with a world-class experience. An industry-leading inflight connectivity solution is a fundamental part of this offering and we are delighted to have Inmarsat’s GX Aviation onboard to offer high-speed inflight broadband to our customers.”

Approximately 1,700 aircraft are currently expected under signed contracts for Inmarsat’s next-generation inflight broadband solutions for airlines, with a new business pipeline of approximately 3,000 aircraft worldwide. To meet growing demand, Inmarsat has a fully-funded development roadmap, including eight fully-funded next-generation satellites. A fifth GX satellite will be launched later this year with a further two GX payloads scheduled to launch in 2020 and 2021. In addition, the next evolution of the network – delivering a further five GX payloads – will make Inmarsat’s Global Xpress network the most agile and flexible constellation ever conceived, assuring customers that their requirements will continue to be met for decades to come. 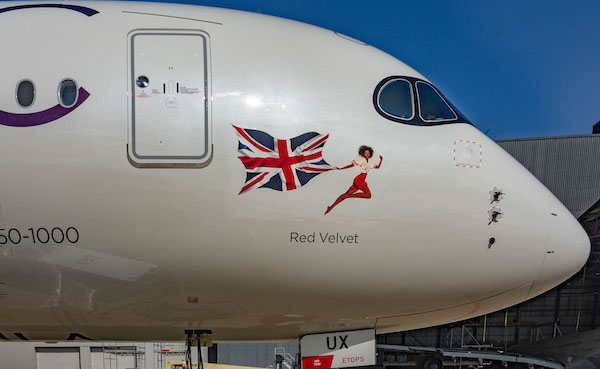 Loading comments for Virgin Atlantic’s Airbus A350 offers customers free access to Inmarsat’s connectivity solution for the next 30 days...