Volotea has reached an agreement with DΔNTE Aeronautical to collaborate in the project to develop a hybrid-electric aircraft for transportation of passengers.

The new aircraft will be eventually able to serve routes between small and mid-size communities, where traditional aircraft are not profitable and other transport alternatives are not available.

This environmentally friendly project is led by DΔNTE Aeronautical and in which, apart from Volotea, other renowned institutions like Instituto de Empresa in Spain, ALTRAN in Europe and University of Sydney and University of Adelaide in Australia are taking part.

Additionally, the new concept will reduce emissions significantly through the use of electric motors, fed by electricity stored by batteries or generated on board with a highly-efficient internal combustion engine.

Industry objectives like IATA´s reduction in net aviation CO2 emissions of 50% by 2050 (relative to 2005 levels) will only be possible by a change of paradigm. The introduction of alternative technologies to conventional jet engines and turbo propellers are key to achieve that goal.

“As part of our proactive environmental policy, Volotea will actively collaborate with DΔNTE Aeronautical in the development of this hybrid-electric aircraft, in order to support the reduction of carbon emissions and noise from aircraft operations. Volotea will provide DΔNTE with market analysis and technical data. Volotea engineers and commercial specialists have been appointed and made available to validate this market opportunity and provide technical support as well”, Carlos Muñoz, Founder and CEO of Volotea stated.

DΔNTE is an aerospace start-up with presence both in Spain and Australia, created to innovate in the aircraft industry with the integration of advanced manufacturing technologies, aerodynamics and electric power plants.

For that purpose, DΔNTE has commenced the design of a 19 to 35 passenger aircraft with all thrust provided by Distributed Electric Propulsion (DEP), batteries for energy storage and an internal combustion turbo-generator working as “range extender”.

It is envisaged that this technology will allow the commercialization of future full electric aircraft. Although DΔNTE´s plans include a future retrofit to a battery only power-plant, this approach is not deemed commercially realistic until the 2030´s. Instead DΔNTE considers its hybrid solution will reduce fuel consumption and emissions more than 50% much sooner than that. 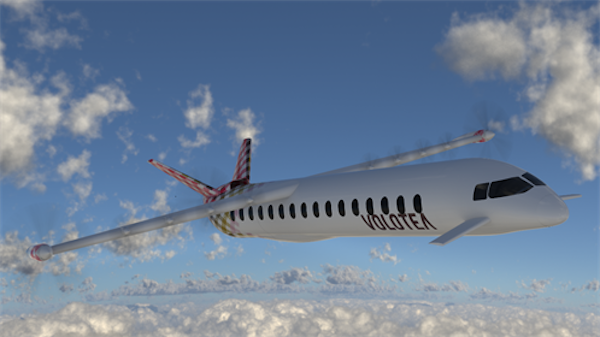 “If we want to make aviation more sustainable, we need to find the sweet spot between ambitious emissions reduction targets and realistic economic propositions. A full electric aircraft is a nice long term goal, but it will have very little impact in the near term if it is just a niche product for wealthy individuals. Electric powerplants with additional hybrid range extenders represent instead a real opportunity to reduce emissions drastically in the shorter term, because they enable a new market for door to door regional air transport with competitive costs. In DΔNTE we are developing the right technology, and Volotea is showing the drive and interest to make it a commercial reality”, Miguel Madinabeitia, co-founder of DΔNTE Aeronautical.

DΔNTE will work with Volotea to define the specifications of this future air passenger commuter to better adapt the aircraft to the most promising markets and routes where the new technology may be introduced in the future.

In order to validate the market opportunity, DΔNTE and Volotea will working closely and also with business schools like Instituto de Empresa in Spain or University of Adelaide in Australia, to estimate and size a new air transport segment that could be monetised and create thousands of jobs.

Upon the successful completion of this first phase, DΔNTE will enter into the detail design and manufacturing of a scaled prototype to be flight-tested as a prior step to its full industrialization and future commercialization. Volotea and DΔNTE expect their hybrid aircraft will be a commercial reality by mid next decade.

A preliminary configuration is already in place but DΔNTE will work in coming months with top aerospace renowned engineering and research organizations, like ALTRAN in Europe and University of Sydney in Australia to validate all the technical hypothesis and have a basic design that will underpin a future flight test phase.