AirHelp has released one of the most comprehensive and accurate data-based evaluations of global airlines and airports. The 2019 AirHelp Score is the 8th of its kind and has analysed a series of key performance indicators over a one-year period, to rank the highest and poorest performing airports and airlines in the world.

Thomas Cook ranks lowest in the world for overall performance out of the 72 airlines analysed, dropping 21 places on its 2018 score (51/72). The carrier placed in the bottom five airlines for its claims processing (2.5/10) and on-time-performance (OTP) (5.6/10). easyJet ranks second lowest (71/72) and Irish carrier, Ryanair, has been named the fifth lowest performing (68/72) globally.

Flybe (11/72) and Virgin Atlantic (15/72) are the only UK airlines to feature in the top 20. Qatar Airways has been crowned the best in the world whilst American Airlines (2/72) and Aeromexico (3/72) take silver and bronze position.

Manchester Airport (127/132) and London Gatwick Airport (123/132) both rank within the 10 poorest performing in the world. Bristol Airport scores highest amongst the UK's airports with an overall rating of 7.43/10. The west country base ranks 70/132 in the world, scoring highest for quality of service (8.2/10).

"The AirHelp Score Report 2019 must serve as a wake-up call to the UK's aviation industry, which is continually letting down those that matter the most - the passengers. It's crystal clear that more needs to be done to adapt to ever-changing demands, whether it's airports adding and extending runways to cope with the influx, or airlines focussing on the industry-wide lack of pilots and often poor cabin-crew conditions," said Henrik Zillmer, CEO and co-founder of AirHelp. 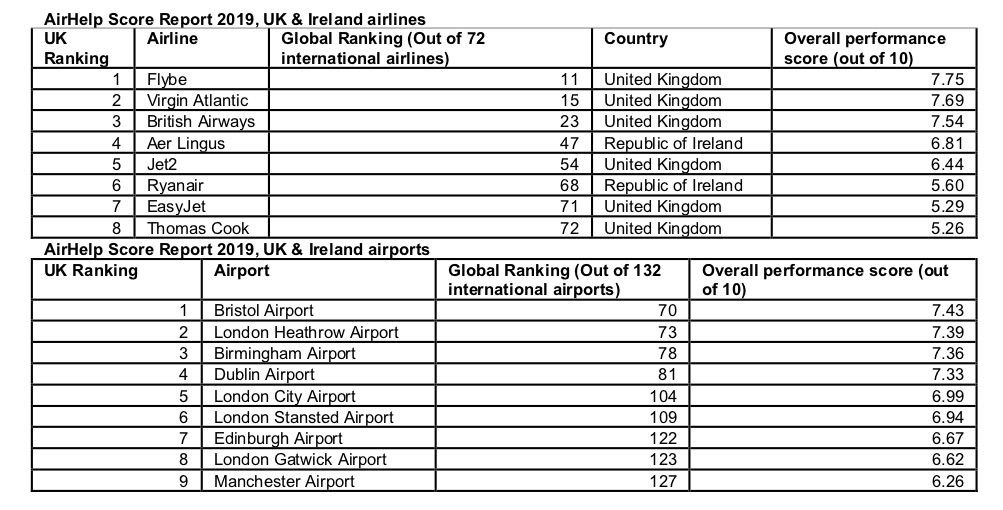 How the airlines and airports are rated

The 2019 AirHelp Score marks the company's eighth report since it began evaluations in 2015. AirHelp developed this report to combine expert knowledge and industry expertise to give air passengers better predictions for what their experiences will look like at different airports, how the airlines will treat them under normal circumstances, and what to expect if their flight gets delayed, canceled or overbooked. To determine the airline rankings, AirHelp rates airlines equally on three areas, including claims processing, on-time performance, and quality of service. Airports' scores are determined by on-time performance, which accounts for 60% of the score, and then quality of service, which is 20% of the score, and food and shopping options which makes up the remaining 20% of the score. To view AirHelp Score in full, please visit AirHelp.com/AirHelpScore.