Václav Havel Airport Prague has continued to grow without interruption since 2013. In 2018, as per the latest operating results, Prague Airport handled a total of16,797,006 passengers, which represents a 9% year-on-year growth. Routes to Great Britain were the busiest last year with the greatest number of passengers traditionally heading to London. Barcelona recorded the highest year-on-year increase in the number of handled passengers on the route. Long-haul routes also significantly enhanced their performance, with nearly quarter of a million more passengers compared to the previous year.

Nearly 16.8 million passengers passed through the gates of Václav Havel Airport Prague in 2018, and a total of 155,530 take-offs and landings were performed. The positive trend has thus continued, with 9% more handled passengers and almost 5% more performed movements, a slightly slower growth rate than the former.

“Last year meant additional growth in both the number of handled passengers and regular scheduled routes at Prague Airport. Three new air carriers launched their operations in 2018 and there were seven new destinations put on the map of connections from Prague. We were able to significantly enhance the long-haul segment by increasing both the number of frequencies and capacity, and by launching brand new routes. As a result, over 250 thousand more passengers used long-haul connections with Prague, representing a 24% increase,”Vaclav Rehor, Chairman of the Prague Airport Board of Directors, said.

The busiest month of 2018 was July with 1,877,369 handled passengers. Last year, on average, 46 thousand passengers passed through the airport each day. A total of 69 carriers operated their flights from Prague, connecting it with 171 destinations, including several new places such as Philadelphia, Kutaisi, Belfast, Amman, Marrakesh, Sharjah and Yerevan.

In 2018, the most popular routes were between Prague and Great Britain, Italy, Russia, Spain and Germany. The busiest 2018 destination was London, followed by Paris, Moscow, Amsterdam and Frankfurt. The most significant year-on-year growth in the number of handled passengers was recorded by Barcelona, followed by Budapest, London/Stansted, Madrid and Antalya. Out of holiday destinations, the greatest number of passengers used flights to Antalya, Heraklion, Hurghada, Burgas and Marsa Alam. 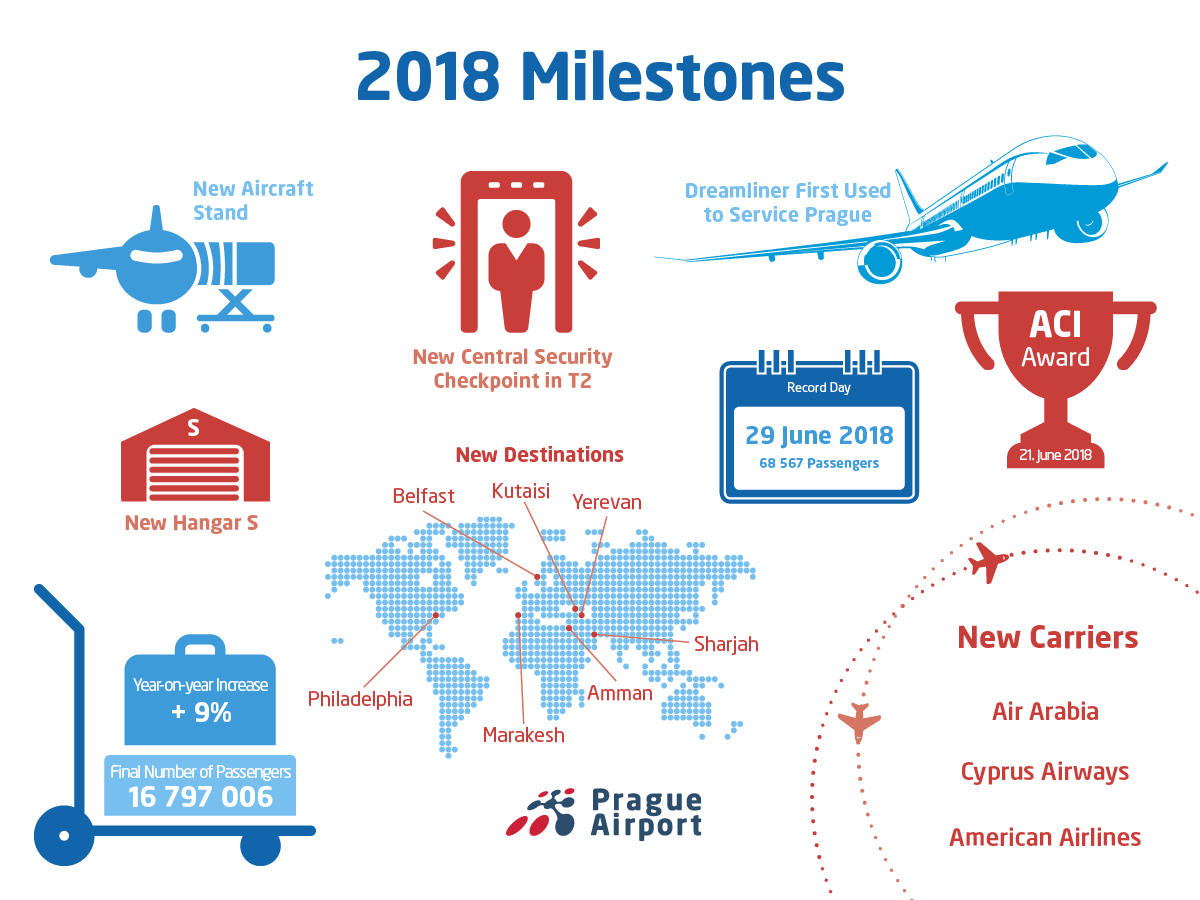 The taxiing of the plane is a critical test of the integration of the aircraft’s propulsion system, ahead of actual flight-testing. The first flight is planned for the Spring and when at full po...