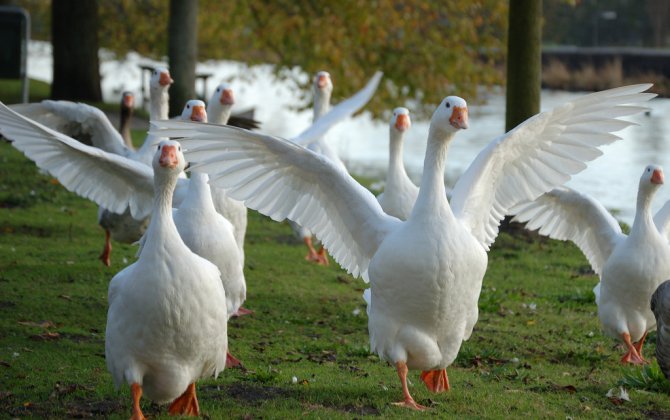 If it comes to eradicating geese or a goose hitting an aircraft with 150 people, the goose has got to go. Maurice Songy, vice president of operations, Chattanooga Metropolitan Airport

Birds are bad about listening to air traffic controllers, so officials at Chattanooga Metropolitan Airport are exploring options for discouraging Canada geese from Lovell Field, where they could interfere with planes that are taking off or landing.

A certified biologist recommended recently that the airport consider eradicating the Canada geese that occasionally gather at the airport, but killing geese would be a last resort, airport officials say.

"I don't want to eradicate things," said airport President Terry Hart. "Right now we're taking steps to make it less friendly for them to be here."

For now, the airport is shooting off loud blanks to scatter geese that congregate near runways.

"But they have a tendency to come back," said Maurice Songy, the airport's vice president of operations.

The fear is that a goose could interfere with a plane as it lands or takes off. The concern is not unfounded.

In 2009, US Airways Flight 1549 was forced to make an emergency landing in the Hudson River after it was struck by a flock of Canada geese during its initial climb from New York's LaGuardia Airport. No passengers were seriously injured in the incident, but it put into national headlines the danger that birds can pose to planes.

There were about 142,000 wildlife plane strikes nationwide between 1990 and 2013, according to the Federal Aviation Administration.

"We've done quite a few things to mitigate their desire to come here throughout the years," Hart said.

The U.S. Department of Agriculture hosted a one-day wildlife hazard training program for 10 Chattanooga airport personnel on Aug. 17 at the airport's request, and the suggestion of eradication followed.

"If it comes to eradicating geese or a goose hitting an aircraft with 150 people, the goose has got to go," Songy said.

Canada geese congregations have come under fire in the area before.

Chattanooga State Community College dealt with an influx of the waterfowl in 2013. The USDA removed about 100 of them from the campus and killed them after then-school President Jim Catanzaro complained that they were interfering with traffic and contended they were leaving behind 50-100 pounds of feces every day.

Catanzaro said he was told the geese would be taken to a preserve in West Tennessee.

In South Dakota, an airport employee last year asked wildlife commissioners in his area to consider a special hunting season for geese that were flocking near the airport.

"Our first step is to try to make the area less attractive to wildlife," Chattanooga Metropolitan Airport spokesman Albert Waterhouse said in a statement Wednesday. "We will explore all options before taking any action against the geese or any other wildlife.

"At this time there are no immediate plans to eradicate the geese."


Loading comments for Chattanooga Airport Officials Bring In Outside Aid For Advice On Geese Problem...

Honda Aircraft Company has established the second HondaJet flight training center with FlightSafety International in Farnborough, Hampshire, in the United Kingdom. Due to increased demand fo...