Japan Airlines began operating regular flights on 23 April on the Tokyo - Moscow - Tokyo route from Sheremetyevo International Airport to Haneda Airport, reviving a historic route opened in 1967. An official event was held at Sheremetyevo to commemorate this significant event with the participation of the Ambassador Extraordinary and Plenipotentiary of Japan to Russia Mr. Toyohisa Kozuki, Vice President and Regional Manager of Japan Airlines for Russia and the CIS Mr. Takeshi Kodama, First Deputy Director General for Production of JSC SIA A.O. Nikulin, and Deputy Director General for Commercial Activities of JSC SIA F.M. Sytin.

"We are proud that the leading Japanese national carrier, a recipient of five stars from Skytrax, has chosen Sheremetyevo for further development of air traffic between Japan and Russia," said Mr. Nikulin at the ceremony. "Sheremetyevo is a recognized leader in Europe in quality of services and the most powerful international hub in Russia in terms of terminal infrastructure and the capacity of the airfield complex. I am confident that JAL passengers will be able to take advantage of the route network of Sheremetyevo Airport for onward flights across Russia and Europe."

Ambassador Kozuki offered his congratulations "on the first flight of JAL from Sheremetyevo Airport to Haneda Airport. In recent years," he said, "as a result of large-scale reconstruction, Sheremetyevo Airport has become the main air gateway of the Russian capital. This transition to Sheremetyevo will make it easier for JAL passengers to transfer to domestic Aeroflot flights. I hope the change of airport will lead to a large number of Japanese citizens visiting not only Moscow and St. Petersburg, but also Russian regions with a rich history and culture."

Mr. Kodama said, "Today, we are happy to open a new page in the history of air traffic between Moscow and Tokyo by re-launching the route between Sheremetyevo and Haneda airports. We are deeply grateful to our passengers, aviation authorities and Sheremetyevo Airport for their unlimited support during the difficult period of coronavirus restrictions. We are determined to continue to provide our customers with a level of services exceeding their expectations, with the help of a 5-star Skytrax rating and a state-of-the-art Boeing 787 Dreamliner, and to contribute to strengthening ties between Russia and Japan."

The opening of direct flights from Tokyo will allow passengers to make convenient and comfortable connections not only in Russia and Europe, but also to a number of destinations in Japan, Asia and Oceania, as well as in the USA and Canada, thanks to the extensive route network of Japan Airlines. In addition, due to the convenient location of both airports, travelers have quick and comfortable access to the downtown area of the capitals, which is especially important for business passengers on this popular business route.

The flagship carrier offers its passengers the opportunity to include up to two flights within Japan to their itinerary with no increase in airfare when buying a Moscow-Tokyo ticket. The most active travelers can also purchase additional flights within the country on the JAL website at special fares offered exclusively to tourists, allowing passengers to visit the most remote and interesting corners of the Land of the Rising Sun.

All Japan Airlines Economy Class tickets include two checked pieces of luggage (up to 23 kg each), and Business Class tickets include three pieces (up to 32 kg each). A detailed "Guide to Japan" on the airline's website in Russian will help passengers prepare for the trip and choose the most convenient route.

JAL will operate a modern Boeing 787 Dreamliner on the route. Services on board will include wi-fi, a built-in multimedia entertainment system, beverage service and two hot meals a day. Passengers with children can order baby food on board, and special baby seats and diapers can be requested in advance at no extra charge.

JAL passengers will appreciate the wide range and high quality of services at Terminal D of Sheremetyevo Airport, where the airline will be serviced. For business travelers, there is a comfortable Moscow business lounge, which has received the prestigious Business Traveler Russia and CIS Awards in the area of business tourism, as well as a comfortable VIP lounge with a separate entrance. A number of exclusive services are available for guests of the VIP lounge: transfer and escort to the aircraft, separate check-in and luggage drop-off, assistance during pre-flight formalities and other services. 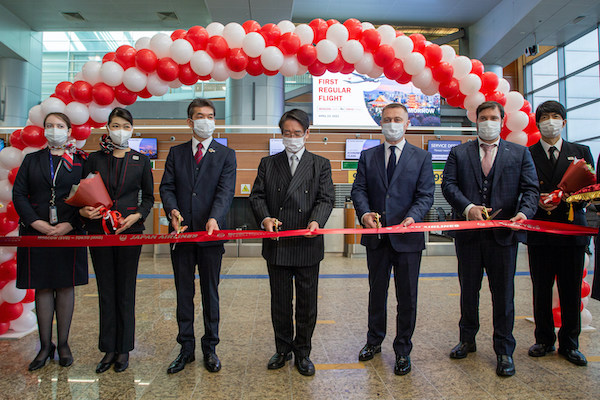