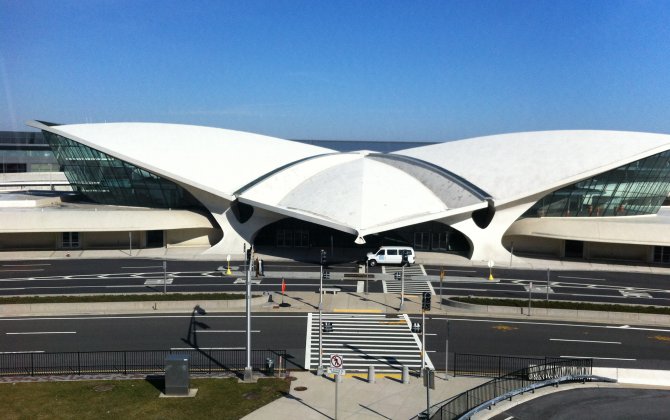 New York Governor Andrew Cuomo has announced the formal approval of a 75-year lease deal to transform the iconic TWA Flight Center located at John F. Kennedy Airport into a hotel complex, which will preserve the national historic landmark while providing additional lodging options and services for travelers.

The project, approved yesterday by the Port Authority’s Board of Commissioners, calls for a 75-year lease agreement with Flight Center Hotel LLC, a partnership of MCR Development and JetBlue Airways Corporation. The cost of the project is estimated to be $265 million, and is expected to break ground next year for its completion in 2018.

“This administration has committed to modernizing New York’s airports for the 21st century by creating gateways worthy of New York City and ensuring travelers have the services they need,’’ Governor Cuomo said. “At the TWA Flight Center, we are able to meet those goals while also preserving its iconic design for passengers to enjoy for decades to come.”

Despite being one of the most important airports in the World, JFK Airport does not have a on-site hotel. The project will deliver a 505-guestroom hotel, which according to Flight Center Hotel LLC  will include 483 rooms and 22 suites, to be built on a six-acre site. The hotel will be complemented with 40,000 square feet for conference, event and meeting space, plus dining and shopping options. The anticipated project will also feature a 10,000 square foot public observation deck.

Designed by Eero Saarinen for Trans World Airlines, the TWA flight Center opened in 1962, and is often taken as an example of the Golden Age of the Jet era. Saarinen was also in charge of designing two major airports: The Washington Dulles International Airport and the old Athens Ellinikon International Airport.

The terminal remained in service for almost four decades. However, capacity constraints and security issues after 9/11 caused its closure in October 2001 after TWA merged into American Airlines, and has remained unused for the last 14 years.

“The Port Authority is proud to ensure the TWA Flight Center plays a critical role in JFK Airport’s future, while acknowledging its importance in aviation history,” Port Authority Executive Director Pat Foye said in a written statement. “The new hotel will serve the growing needs of our passengers throughout the 21st century, with a touch of the bygone era of glamorous mid-20th Century jet-age travel.”