Over 170 destinations are being served nonstop again from Munich Airport

Airlines are gradually increasing the number of flights offered at Munich Airport, which had been reduced as a result of the Corona crisis.The number of destinations served regularly from Munich has now risen to over 170. This represents around 80 percent of the destinations that were on the flight schedule in 2019, the year before the crisis.

Since this week, travelers from the Bavarian capital can now fly nonstop to Toronto again with Air Canada. As Germans are now also allowed to enter Canada again, the demand has increased accordingly. In addition to Air Canada's three weekly flights to Toronto, passengers can also travel to Canada on Lufthansa's five weekly flights from Munich to Vancouver.

Since January 2021, Singapore Airlines has been serving the Bavarian capital again. Now the airline increases the number of its flights from Munich to Singapore from three to five weekly frequencies. These two additional VTL (vaccinated travel lane) frequencies allow German fully vaccinated passengers to enter Singapore without quarantine, provided they have been within Germany for the last 21 days prior to departure and hold a negative PCR test. Travelers must also undergo a PCR test both on arrival and after three days in Singapore.

From October 1, Lufthansa will be flying to Dubai three times a week using the modern Airbus A350 long-haul aircraft. Likewise in October, Emirates will increase its service on the same route from seven to nine weekly flights.

As from next week, Lufthansa is boosting its flight offerings within Europe significantly: The "crane airline" will be operating around 100 more flights per week to a total of 20 European destinations. Among others, the major cities of Amsterdam, Budapest, Copenhagen, Milan, Paris, Rome, Stockholm and Vienna will be served more frequently. In addition, connections to Birmingham, Basel, Leipzig, Luxembourg, Paderborn and Stuttgart will be resumed.

EasyJet is also contributing to the expansion of the European route network from Munich. The British carrier is now flying again to London-Gatwick (four times a week) and Milan-Malpensa (three times a week). In addition, the airline plans to resume further connections to the United Kingdom in the coming months. 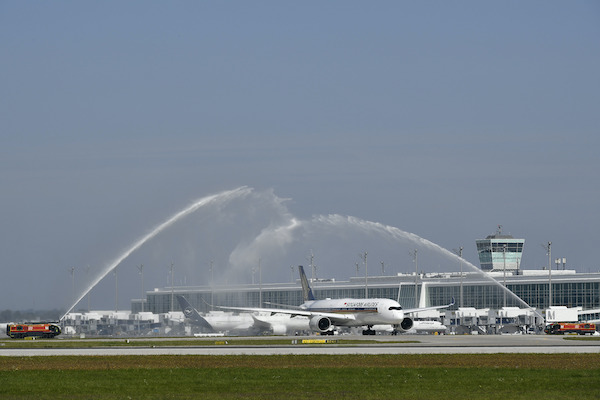 Loading comments for Over 170 destinations are being served nonstop again from Munich Airport ...