By announcing an international tender to attract investors and developers, Riga Airport is launching implementation of the strategically important RIX Airport City project with the aim to create a progressive airport city of the future providing not only traditional aviation services, but also creating an environment for the development of various businesses, offering multi-modal transport connections, and contributing to the residents and the economy of the region as a whole within ten years.

Laila Odiņa, Chairperson of the Board of Riga Airport, outlines the development vision: "Today's airports are more than just air traffic stops. Like ports and railway stations in the past, today's airports are creating new quality business ecosystems around them. The strategic connection with the Rail Baltica high-speed railway, which will link the Baltic capitals with the railway networks in Finland, Poland, and Germany, is an excellent opportunity for Riga Airport to become a new generation Northern European hub for traffic, business, and tourism. Our goal is to create a people-oriented airport city, which is itself a destination with value – for business, new services and leisure." 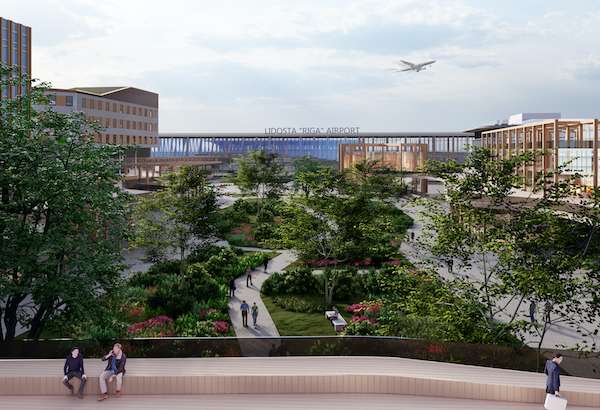 The development of the RIX Airport City, which is part of the Airport's medium-term strategy "Runway 2027", includes the development of existing traditional aviation services – passenger and cargo transport – and integration thereof with other business activities, from innovation and start-ups, e-commerce, logistics and manufacturing businesses, to various kinds of tourism, hospitality, and leisure services.

The RIX Airport City concept is based on the vision of an urban city with the aim to create a connected, state-of-the-art, people-friendly, and sustainable space of opportunities. Development of the future airport city will be based on sustainable planning, meeting the requirements of industry-recognised energy efficiency standards. Priority will be given to geothermal and solar energy production systems, responsible circular approaches to use of resources, building technologies using sustainable and renewable materials, and green architecture.

In the area of 24 hectares owned by the Airport and located in the direction towards Riga from the Airportterminal and the future Rail Baltica station, a business and leisure centre will be developed with the help of investors with the total area to be built of up to 340 000 square metres; at least 10 % of the area will be dedicated to parks and public open space. Hotel, office and conference centre space, retail, logistics and light industry, with a preference for aviation-related industries, cargo and logistics, e-commerce development, IT, electronics, tourism, and pharmacy sectors have been defined as the main purposes of the use of the area. 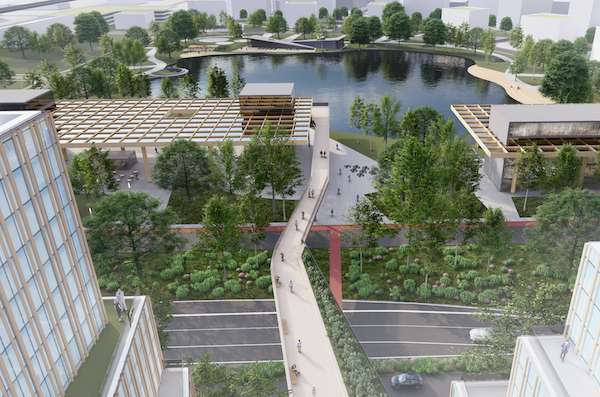 The RIX Airport City will consist of several interconnected zones tailored to specific needs. The city's business centre will include hotels, conference and office buildings, shopping centres, public open spaces, and transport facilities – a new airport terminal with the annual capacity of up to 12 million passengers, Rail Baltica railway station and local and international public transport stops. It is planned to develop a park area around the lake in the territory, where there will be venues for culture, catering, trade, recreation, and entertainment. The expected number of daily visitors of the Airport City exceeds 30 000 – passengers, employees, visitors.

Commercial and light industry production facilities and offices, research, development, education and logistics facilities will be located on the periphery of the Airport City, while the industrial zone –air cargo handling and logistics infrastructure – will be developed in the northern part of Riga Airport, including outlining the facilities to create Rail Baltica rail cargo and military mobility access to the Airport.

The RIX Airport City zoning and internal transport system will give priority to pedestrians, bicycles, and other environmentally friendly means of transport. The green public open space will run through the entire urban area of the Airport, creating a separated and thus safe and comfortable pedestrian, cycling and vehicular traffic.

The first stage of the RIX Airport City development, which is aligned with the completion date of the Airport's new terminal and Rail Baltica rail link in 2027-2030, includes development of a four-star hotel with direct access to the Airport terminal and station and class A office buildings. 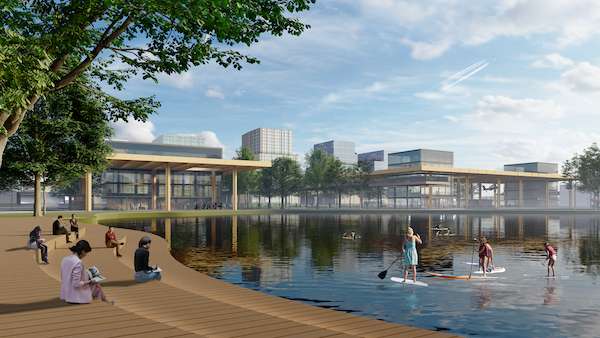 A tender for attraction of investments

For the purposes of further development and implement of the RIX Airport City concept, Riga Airport has announced an international tender to attract investors and developers. The tender will take place in two stages applying the tender dialogue method. Potential interested persons can apply for the first qualifying stage by 16 December this year. After that, Riga Airport together with the applicants qualified for the second stage will continue the process of negotiation on the details of the initial concept of the RIX Airport City to obtain the most appropriate and economically advantageous proposal for the development and use of the territory.

The contract with the successful tenderer is expected to be concluded by the end of 2023.

The expected scope of investments for the development of the RIX Airport City is up to EUR 300 million. 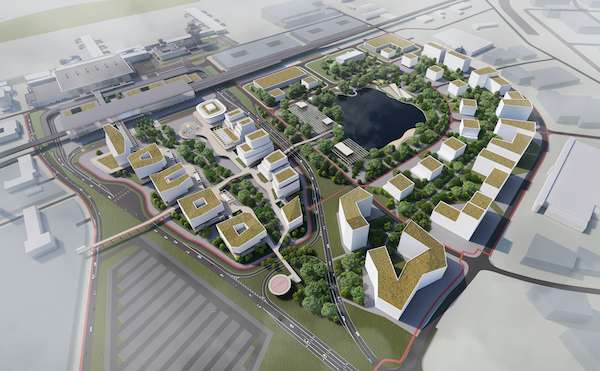 Loading comments for RIX Airport City - an international tender for investors Riga Airport most significant development project of the decade ...

Rolls-Royce has conducted successful tests of a 12-cylinder gas variant of the mtu Series 4000 L64 engine running on 100% hydrogen fuel. The tests, carried out by the Power Systems business unit,...

To assist schedulers in advancing their careers, the National Business Aviation Association announced a new Business Aircraft Scheduler Certificate Program, ahead of the opening of the 2023 NBAA Sched...