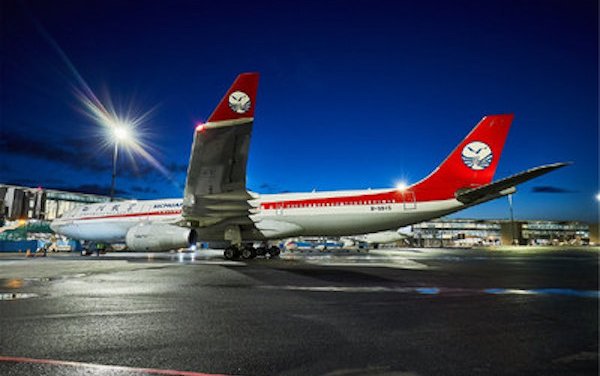 At 5:39 am local time on September 16, 2019, Sichuan Airlines flight 3U8271, carrying 278 passengers, landed smoothly at Helsinki-Vantaa Airport, marking the success of the airline's maiden non-stop flight from Chengdu, China to Helsinki, Finland.

A ceremony for the maiden flight and a promotional event for the launch of the new service were then held by Sichuan Airlines in Helsinki, with representatives from the Chinese Embassy in Finland, the Finnish Directorate of Immigration, the Finnish Tourism Board, the municipal governments of Helsinki and Vantaa, Helsinki Business Hub, local travel agencies and Chinese-funded firms in attendance.

The new route was originally to fly directly to Copenhagen. However, the stop in Helsinki was added, transforming the airline's original Chengdu-Copenhagen service to the current Chengdu-Helsinki-Copenhagen service, becoming one that also connects two Nordic cities. The schedule is one flight every Monday and Friday. An Airbus A330 aircraft will service the route, with flight numbers and flight times as follows (all times are local times):

Finland is renowned for its Aurora Borealis and winter resorts. It only takes nine hours for travelers to fly from Chengduto Finland, home of visual phenomena that can only be seen in regions bordering the Arctic Circle and a world of ice and snow.

Passengers of Sichuan Airlines who depart from mainland China/overseas (regional) airports and take connecting flights in Chengdu are entitled to a range of transit benefits, including free accommodation, coffee break service and meal, VIP lounge, rapid security check and visit to Chengdu Research Base of Giant Panda Breeding. Sichuan Airlines has launched international non-stop flights from Chengdu to Hanoi, Ho Chi Minh City, Helsinki, Istanbul, Rome and Yangon, among other international cities, since the beginning of this year. The airline has gradually expanded their "Panda Route" with international (regional) courses increasing to more than 50 by now.

Avolon has agreed with Recaro Aircraft Seating an order for twenty shipsets of the SPRINT seat, consisting fifteen shipsets for use on A320 aircraft and five shipsets for the B737NG aircraft; the...

Cogratulations ALSIM, time to celebrate the milestone of its 100th ALX simulator sale!  It was in 2008 that we presented a new and innovative training concept that combined various aircraft types...

Bye Aerospace and Safran Electrical & Power announced that a Cooperation Agreement has been signed to equip the eFlyer 2 & eFlyer 4 aircraft with the ENGINeUSTM electric smart m...

Latvian airline airBaltic has started performing direct flights from Vilnius to Kyiv, Ukraine. The new flights will be performed two times a week on an Airbus A220-300 aircraft. Th...