The year 2018 for Lithuanian Airports – the year of the leap: records have been hit in both number of the passengers and flights

The year 2018 will be recorded among the best aviation years for the company Lithuanian Airports, since new records were reached - 6.3 million passengers were served and 61 thousand flights were conducted. The biggest breakthrough occurred in the main airports of the country – Vilnius Airport; the year, however, was also very intensive for Kaunas and Palanga branches.

Upon notifying of the skyrocketing indicators of aviation services already at the beginning of 2018, Lithuanian Airports were recording a growth up to the very end of the year. It was estimated after summing up the annual results that the country’s airports served 6.3 million passengers in total, i.e., more by 19 percent than in 2017.

“The biggest flow in its history, 4.9 million passengers, was successfully served by Vilnius Airport which exceeded the result of 2017 by more than one million passengers. Besides, operation of the Palanga airport favourably impressed us all year long. At the country’s third largest airport, we also recorded a record - more than 316 thousand travellers were served, i.e., more by 7 percent than a year before,” the Executive Director Laura Joffe commented on the statistical data.

According to her, Kaunas Airport opened a new and important page in its history in 2018 by expanding its business profile. The first traditional airline commenced operation at this airport – LOT Polish Airlines which presence allowed offering even more services to customers requesting business flights. Near the year-end, Kaunas Airport announced of its impressive results – exceeded the threshold of 1 million passengers served. During the previous year, this was achieved only due to the reconstruction of the runway of Vilnius Airport when the biggest passenger flows had been directed to Kaunas for over a month.

According to Ms. Laura Joffe, a consistently growing number of air passengers is a world trend. However, a number of factors have had huge significance for the successful operation of the country’s airports. Uninterrupted and successful negotiations with air carriers are of fundamental importance. Owing to them, SCAT Airlines, as well as the cargo airline Turkish Cargo commenced flights in the capital. Besides, an arrangement with the tour operator Itaka has been achieved - having launched flights from Vilnius last year, this year it will offer holiday routes also for those travelling from Kaunas Airport.

A bigger breakthrough in the number of carried passengers has been partially determined by the fact that flights in some directions were conducted more often; also passengers were carried by larger aircraft. The number of flights from Vilnius to Moscow, Helsinki, Istanbul, Stockholm and Riga, and in Palanga – to Riga and Warsaw has increased. Owing to a larger aircraft, more passengers could fly from Kaunas Airport to London and Norway and from Palanga – to Copenhagen and London.

According to the Head of the Aviation Services Division of Lithuanian Airports Mr. Aurimas Stikliunas, a considerably expanded map of directions has also brought the long-awaited benefit – even 99 directions were offered for business representatives, Lithuanian and foreign passengers. The biggest news became exotic directions of the Near East and Middle Asia. The capital’s gateway was connected with the capital of Jordan Amman and the capital of Kazakhstan Astana, whereas from Kaunas planes started flying to Tel Aviv in Israel. Considerably strengthened connections with Italy have also become an important step at Kaunas airport. Now it is possible to reach Bologna, Milan and Rimini from Kaunas.

“Apart from the new directions, we also greatly appreciate an improved communication with Ukraine. Now it is possible to reach Lviv from the capital’s gateway. Besides, another very good piece of news is a bridge extending from Kaunas to the city of Turku in Finland. This is especially important for promoting incoming tourism from Finland. It is pleasing that also other stakeholders have intensively worked towards the emergence of this connection and in this case a very important financial support has been allocated by Kaunas City Municipality,” stressed Mr. Stikliunas.

The aviation expert noted that expectations of even bigger operating volumes are raised by the new directions announced last year that will be launched from this spring. From Vilnius, flights will be conducted to London City and Tbilisi and from Palanga – to Dortmund. These connections have been sought and intensive negotiations regarding them have been held having regard to the needs of the Lithuanian business community.

Last year a solid growth in the number of flights served at Lithuanian Airports was also recorded - 11 percent. More than 61 thousand flights were served accordingly. Vilnius Airport worked most intensively by serving more than 47 thousand flights, followed by over 9 thousand flights taken place in Kaunas, and nearly 5 thousand in Palanga.

The top ten most popular destinations and airports to which flights are conducted at Lithuanian Airports did not change in 2018. The majority of passengers were carried to the United Kingdom – 21 percent, Germany - 10 percent, and Norway – 9 percent. Meanwhile among the most popular airports the leading positions were taken by London Luton, Copenhagen, and Warsaw Chopin airports. Alongside the airlines that served the biggest number of passengers, mention is to be made of Ryanair, Wizz Air, Small Planet Airlines, and airBaltic.

The Lithuanian airport network includes three airports in Vilnius, Kaunas, and Palanga. During 2018, they serviced 6.3 million passengers and 61 thousand flights. During the winter season, 15 airlines organize direct flights in 66 regular directions to 57 cities in 27 countries. Based on data of the Airports Council International (ACI Europe), Lithuanian Airports contribute to the Lithuania’s GDP by 2.5 percent. 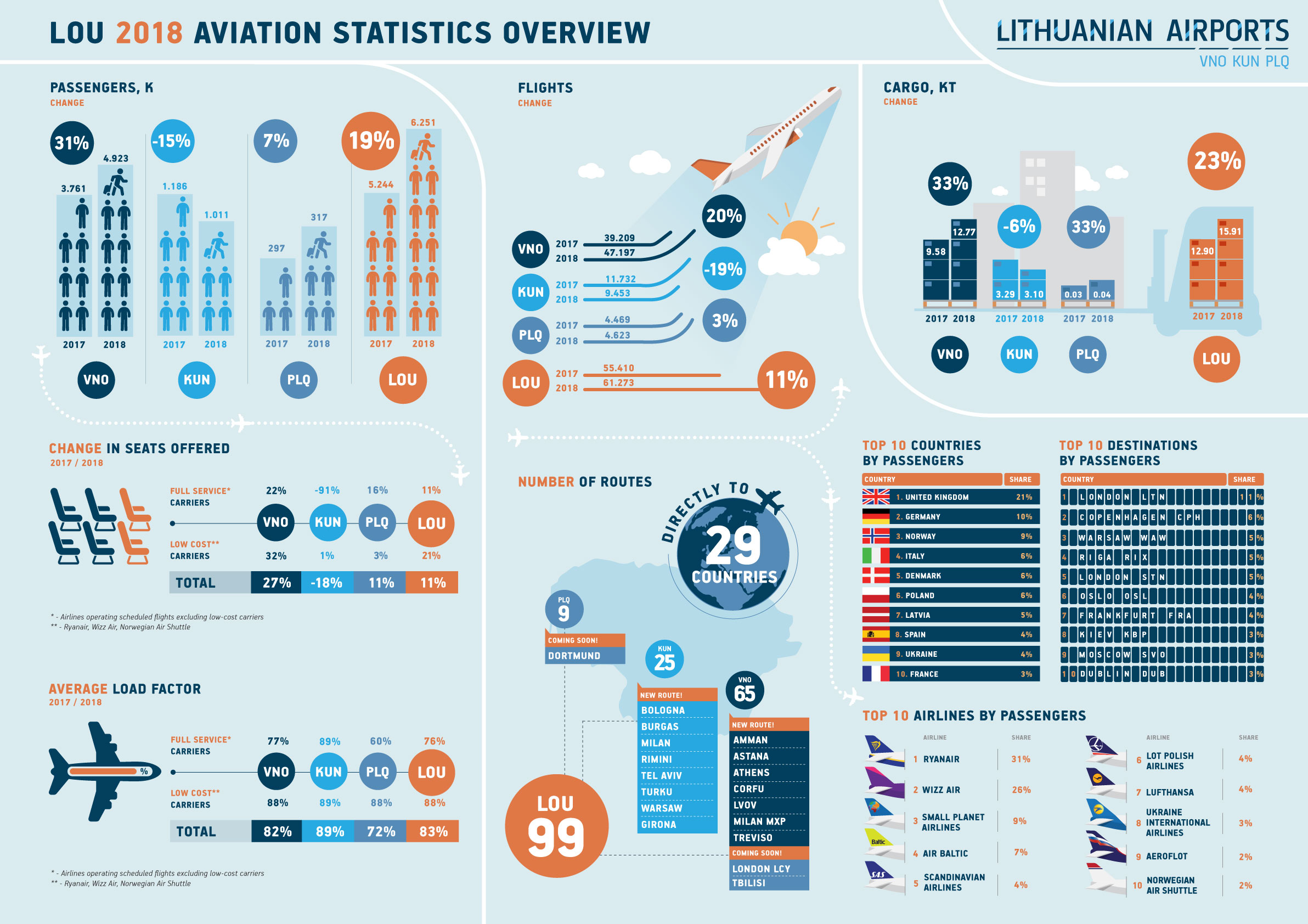 Loading comments for The year 2018 for Lithuanian Airports – the year of the leap: records have been hit in both number of the passengers and flights...

DHL Express has welcomed the arrival of its new Boeing 777 freighter at Singapore Changi Airport. The freighter, which sports a dual DHL-Singapore Airlines livery, has a maximum capacity of...