Tamarack Aerospace celebrated the 100th installation of its revolutionary Active Winglet System at the Sandpoint, ID headquarters. The Tamarack team developed the first of its kind and only Active Winglet technology enabling aircraft to use much less fuel, fly farther with greater payloads and a more sustainable carbon footprint. The 100th installation milestone celebrates Tamarack’s continued growth and global leadership in winglet technology and aviation sustainability.

Retired California Air National Guard jet pilot, business owner and owner of the Cessna Citation jet that received the 100th Active Winglet installation Larry McKoane picked up his plane and along with his wife Barbara McKoane flew back to their California home after the 100th installation ceremonies.

“The reason we chose Tamarack winglets was primarily for performance improvements on the airplane, that allowed us to expand our business capabilities throughout the West Coast. We’re also looking forward to the increase in safety because if you fly into high altitude airports in the summertime, the winglets are going to improve our safety margin substantially,” said McKoane, president and CEO of Clawson Honda and Clawson Motorsports in Fresno, CA.

“This 100th installation is great for Larry and his bank account,’ said Jacob Klinginsmith, President of Tamarack Aerospace Group. “Our Active Winglets are a sustainability boon. Think about the environmental impact of saving 25 percent of your fuel. It’s a huge step forward in protecting our natural resources and for aviation.” 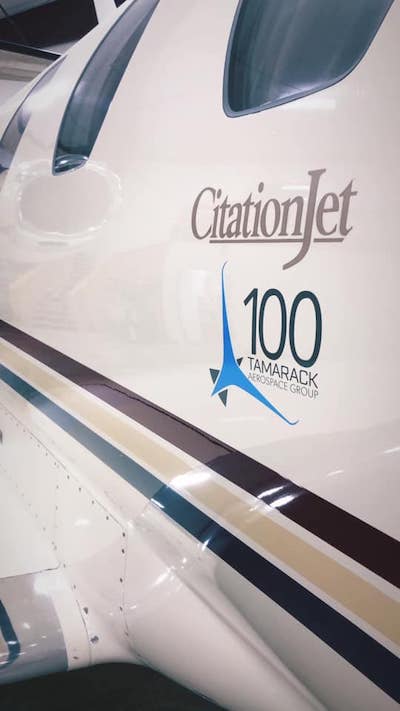