Passion is a force considered as an engine for so many things... Passion for football, quite an amazing force... So what's happening ahead of all-English European football finals of 2019? How football fans are travelling, how they are flyiing?

According to Luxaviation UK, there is a surge in requests and bookings ahead of the UEFA Champions League and Europa League finals, more than doubling its average monthly activity from the UK to host cities Madrid and Baku.

This comes on the back of low-cost airlines and hotels significantly raising their prices for the in-demand events, with one-way flights from London to Madrid priced between £500-£750 – roughly a 1,000% fare increase – and budget hotels charging more than £1,000 per night. Furthermore, with no direct flights from the UK to Baku available, football fans are searching out alternative options, such as private aviation.

The charter price of a private jet with Luxaviation UK from London Luton Airport to Madrid, on a Cessna Citation Excel, suitable for up to eight passengers, is approximately £25,000 – equating to approximately £3,125 per person.

Patrick Margetson-Rushmore, chief executive of Luxaviation UK, says: “I received a phone call within four minutes of the final whistle of Liverpool’s Champions League semi-final victory against Barcelona, which was an immediate booking for an Embraer Legacy flight to the final in Madrid. The all-English affair has been extremely popular with our clients this year. Due to the hike in airline and hotel prices, football fans have been paying a relatively similar fee to fly privately, giving them access to all the timesaving and exclusivity benefits that a commercial airline simply cannot provide.

“For the Europa League final, Baku is an extremely difficult destination to get to, with airlines offering no direct flights, meaning travel time takes the best part of 24 hours. Flying privately will get you to Baku in under six hours.”

George Galanopoulos, managing director of Luxaviation UK, says: “Major sporting events represent a significant proportion of our business activity each year. We work directly with charter brokers and clients to ensure that we have plenty of capacity to cater for requests to and from these events. We anticipate that certain events are going to be popular with our clients, like the Champions League and Europa League finals, so we ensure that a proportion of our fleet will be available.” 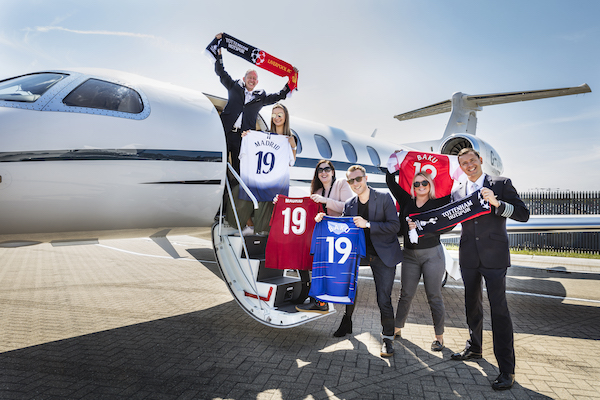 Loading comments for A boom of private jet bookings ahead of all-English European football finals...