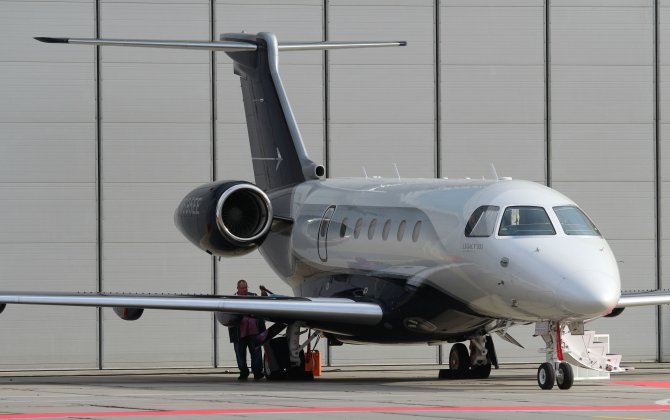 Brazilian aircraft manufacturer Embraer has demonstrated duringin Jet Expo 2015 just three of its models - Legacy 650, Phenom 300 and Legacy 500. Exactly Legacy 500 got special attention of visitors. Debut of Legacy 500 was really successful.
"We launched theLegacy 500 certification process in Russia and are looking forward to pass the first aircraft with the Russian registration already in August 2016. Meanwhile several business jets will be operated on behalf of Russian owners but in foreign aviation registers. Jet Expo 2015 clearly showed that the plane was really interesting for Russian audience at the end of the exhibition we have a great results, "- commented Embraer Regional Sales Director of CIS and Baltic countries Nikolai Goloviznin.
At the moment in Russia and the CIS countries there are 52 Legacy 600/650  and Legacy 500 has all the chances to increase this figure. Till the end of 2015 Brazilian manufacturer plans to pass to customers 25 aircraft, and next year - at least 30 aircraft.
Getting to know Embraer Legacy 500 we realized, that it shows new levels of standards among the "classmates". The plane is equally good for both: pilots and passengers. Let's start with the first. Embraer Legacy 500 cockpit shows a minimalist dashboard and the latest avionics Rockwell Collins Pro Line Fusion, which has proven itself in many types of business jets.

Starting form plane scratch, maximum of wishes of customers and operatots as well as of potential buyers were taken wery seriously. Pilots have four 15.1 "display, integrated data processing system on the status of the flight, high-frequency communication system, the system of artificial vision system graphical flight planning, complex for the prevention of a possible collision in the sky, solid-state meteorological radar and navigation system VOR / DME.
Embraer Legacy 500 can accommodate up to 12 passengers, the standard interior set is made for only eight seats, but, if necessary, the manufacturer can convert the interior, increasing the number of passengers with the same lever of comfort as in the case of eight-picking. The design of the passenger compartment is made by Embraer cooperating with BMW Group Designworks USA. Customers can have any of four basic configurations, in accordance with their wishes. Cabin can also be with lounge area with soft triple sofa.
In order to maximize passenger comfort Embraer has chosen seats from the world's leading provider of aviation furniture and equipment B / E Aerospace. This standard seat can turn 360 degrees and includes several options - vibromassage, the lumbar support and a comfortable footrest. The width of each seat - 67 centimeters.
Also, eight seats can be arranged in four full beds. Two berths are folding sofas.
Well, now the main thing. Range with four passengers is 5788 km at a speed of 863 km / h (the maximum cruising speed). Thus for the takeoff aircraft need only 1245 meters, and running is symbolic - 647 meters, making it the favorite for flights to/from airportst with short runways. All these features thanks to two turbofan engines Honeywell HTF7500E, which are also considered to be one of the most environmentally friendly in its class.
For flights Legacy 500 is available in a height of 13,716 meters. Another plus - the aircraft is very economical. So, to overcome "the first three hundred nautical miles," he needs to just 702 liters of kerosene, six - 1123 liters, well over a thousand miles consuming only 1699 liters.
By the way, Legacy 500 won the prize as "Aircraft of the Year" at Corporate Jet Investor 2015. Cost of Legacy 500 starts at $ 19,995,000. That is "tasty" enough for this type.
American type certificate for the Embraer Legacy 500 was received back in November 2014, a month after approval has been granted by EASA. First aircraft delivered to the customer - October 10, 2014. Business Jet "stayed" at home in Brazil. The company has already started to expand its assembly plant in Melbourne, Florida. In the new areas the manufacturer plans to expand the assembly of new aircraft Legacy 500 and 450. In the second half of 2016 the company plans to put aе new plant at least one Legacy 500.

De Havilland Canada delivered the first of three new Dash 8-400 aircraft ordered by Biman Bangladesh Airlines and the aircraft is enroute to Bangladesh. The aircraft were ordered under a pur...