Air BP, the international aviation fuel products and service supplier, has completed its first fuelling at Muenster-Osnabrück International airport (FMO/EDGG), Germany. Air BP fuelled an Airbus A319 on April 5th marking the official start of operations. In addition to jet fuel, the company is supplying avgas 100LL and for the first time at an Air BP location in Germany, unleaded avgas, UL91.

Air BP secured the contract at Muenster-Osnabrück in September 2017 underlining its growing presence in the country.

Jürgen Kuper, Air BP general manager for Central Europe and Benelux, commented: "We are very pleased to be able to supply Muenster-Osnabrück with immediate effect. We also want to contribute to the further positive development of the airport. This cooperation enables us to support the business activities at FMO which is beneficial for customers, passengers and general aviation as well as the airport’s operational management.”

Muenster-Osnabrück Managing Director, Prof. Dr Rainer Schwarz, added: "We decided to award the contract to Air BP not only because of its recognized expertise in technical and operational support, but also because of its strong sales network in all segments and its willingness to invest.”

Air BP is currently present at 41 airports in Germany and is one of the leading fuel suppliers in the country. Air BP’s operations in Germany range from supplying fuel at large international airports such as Frankfurt, Düsseldorf and Munich to smaller airports dedicated to general aviation.

Muenster-Osnabrück International airport reported passenger numbers of just under one million in 2017, an increase of over 23 percent compared with 2016 – making it the fastest growing airport in Germany last year.

Business and general aviation activities are also growing with flexible opening hours offered around the clock. 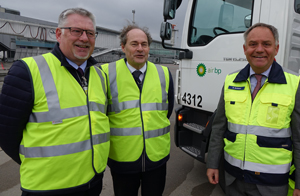 Mitsubishi Aircraft Corporation completed its maiden flight with the first Pratt & Whitney GTF™ PW1200G engine assembled in Japan. The flight was completed in the United States at the c...

Business environment - What is going on

By Cdr. Bud Slabbaert  Isn’t amazing that hardly anyone in a business or office environment really dares to say loudly and openly “Hey, what’s going on?” What does...

The performance of the BR725 enabled the Gulfstream G650ER™ and its sister aircraft G650 to revolutionise the business aviation market, flying faster and further than any other ultra-long-r...