Vertical takeoff and landing, hybrid propulsion, autonomy and safety: with its ATEA aircraft, Ascendance Flight Technologies is launched in the race towards the mobility of tomorrow. Now based in Toulouse, the start-up created in 2018 continues to develop its hybrid electric-vertical takeoff plane in the heart of the European aeronautical capital. A project whose ambitions and technological choices already reflect the full potential of a reinvented air future. The Covid-19 crisis has redrawn the contours of the aeronautical world and its economic survival is at the heart of all concerns. The latter will involve, among other things, the development of new promising segments and a real capacity to respond to environmental challenges. The aeronautical support plan recently unveiled by Bruno Le Maire should help support job retention and support technological innovation.

A plane for revisited air mobility

It’s an evolution that leaves plenty of room for electric aviation and new mobility aerial, two priority axes for Ascendance Flight Technologies, which did not wait for the crisis to devote yourself entirely to it. Its founders, four aeronautical engineers previously involved in the Airbus E-Fan electric plane program, have been working for over two years to make ATEA their VTOL (Vertical Take-Off and Landing) device project a reality. Named in reference to the god of space in Tahitian history, this plane imagined as an alternative to the helicopter allowing a reduction in flight emissions of 50% will be able to transport up to four people (a pilot and three passengers) , over a distance of 150 km and at a speed of 200 km / h. A new generation aircraft, compact, greener and more agile, capable of meeting the challenges of tomorrow's air mobility, which should reach more than 20 billion dollars by 2030.

"We designed ATEA with four permanent requirements in mind," explains Jean-Christophe Lambert, co-founder and CEO of Ascendance Flight Technologies: a safe and comfortable passenger experience, innovative and solid technology, optimized societal acceptance, above all in terms of environmental impact and noise pollution, and competitive costs for operators and passengers. "

These specifications guide a new form of development, centered around energy, emission reduction and sound discretion. ATEA will therefore be a composite aircraft, capable of carrying 450 kg of payload, and equipped with a hybrid propulsion system focused on energy efficiency, which will combine an electric battery system for the take-off phase and a heat engine for the flight phase. A solution that has the double advantage of minimizing noise pollution and ensuring the recharging of batteries in flight, thus limiting downtime on the ground.

Cleaner and quieter, ATEA will also be safe: the development team has opted for a distribution of propulsion, provided by several engines. A way to strengthen engine resilience and security. Controlling noise pollution, essential to accepting this device intended to fly over urban areas, is a major challenge. The envisaged technical solutions are being worked in partnership with ONERA (National Office for Aerospace Studies and Research).

The first test phase, carried out in 2018 with a 1/6 scale prototype, proved to be rich in lessons, especially concerning the flight transition phase. Many improvements resulted from these tests, which will be evaluated in 2022 with the flight of the next scale 1 prototype. "Confronting these technological developments with the realities of flight has not only been extremely useful for us, but has allowed us to assess their ability to be integrated into other aeronautical models, underlines Jean-Christophe Lambert. Beyond its use, we see ATEA as a technological catalyst allowing us to develop innovations that could also benefit others, and serve to positively change the environmental impact of conventional devices. "

A promising installation in Toulouse

Firmly supported by the Occitanie Region, Ascendance Flight Technologies moved to Toulouse in early 2020, an environment favorable to its development. "We received a welcome that met our expectations," says Jean-Christophe Lambert. With this support, the new version of ATEA will emerge at Muret-Lherm aerodrome, in tailor-made installations. We have also integrated the Nubbo incubator and are currently hosted at Village by CA. We appreciate the density of expertise, the range of talents and the infrastructures of this aeronautical ecosystem, now at hand. "

The company currently has 12 people, a workforce that will increase, with a dozen hires planned by the end of 2021, to reach more than 50 positions in 2022.
Ideal conditions for fulfilling the next major objectives: to start the test phase of the full-size prototype in 2022, and to produce the aircraft that will perform demonstration flights at the Olympic Games 2024 in Paris. A realistic schedule given the progress of the project and the commitment of solid partners, such as Aéroports de Paris. The young company is well on the way to internationalization, and joined the Californian Plug & Play accelerator in March 2020. 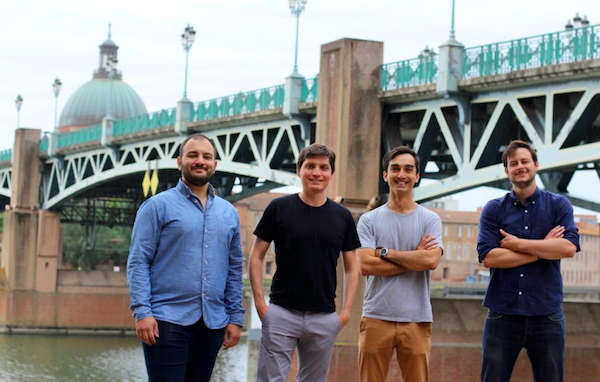