Tamarack Aerospace is thrilled to announce that the National Aeronautic Association (NAA) has recognized Nicholas Guida, CEO and Co-Founder of Tamarack Aerospace, and J. Wickham Zimmerman, 30-year pilot, aircraft owner, and CEO of Outside the Lines, for U.S. National Record Aeroplanes Class C-1.e, Group III Speed Over a Recognized Course record. The elapsed time of the record nonstop January 26 flight was four hours, 35 minutes, and 11 seconds in a Cessna 525 Citation (N44VS). The Active Winglet transformed aircraft travelled 1,386 miles and used a total of 2,610 pounds of fuel.

This record flight was part of the “Fly-Off” between Tamarack Active Winglets  and a flat wing Cessna (N741CC) from Portland, ME to Palm Beach, FL. Aircraft Owners and Pilots Association (AOPA) journalists were onboard both aircraft to document the event, which was tracked live on the web. The record was recognized by the NAA, which is the record-keeper for United States aviation and is the oldest national aviation club in the United States.

Guida is proud of his record-setting flight. “I am excited to see Tamarack Active Winglets be recognized for their capabilities in flight. Active Winglet mods can result in up to 33% fuel savings, depending on weather conditions and other variables.” Guida’s post Fly-Off interview is available to stream online.

Zimmerman shares, “I am very pleased with how the Active Winglets performed in January’s fly-off and am proud to have been a part of this record setting occasion. Active Winglets provide dramatic fuel savings, increased safety benefits, and much more. I am glad that the aviation industry is able to see this game changing technology in action.”

Tamarack Active Winglets consist of a wing extension, a winglet, and an autonomous load alleviation system. The technology features instantaneous adjustment to turbulence, providing smoother and safer flights, quicker climbs, allowance for shorter runways, fewer stops, and up to 33% percent reduced fuel use. Tamarack Active Winglets modifications are featured on more than 130 CitationJets today, and are being considered for other aircraft including single-aisle commercial and military aircraft. 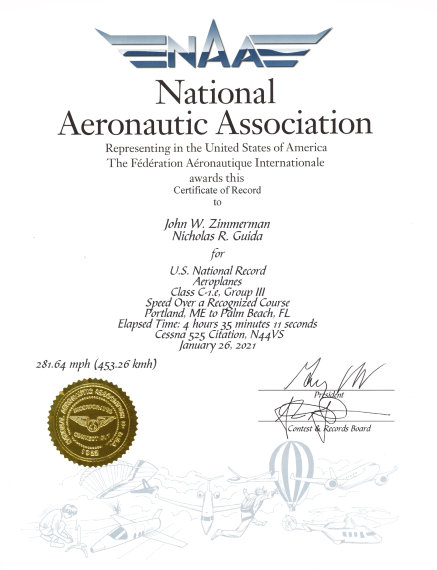