IADA began tracking sales metrics in April on a monthly basis as a result of the volatile used aircraft sales transactions caused by the impact on the economy from the COVID-19 contagion. Representing the top seven percent of the world’s aircraft dealers, IADA is generally responsible for 40 percent of preowned aircraft sales.

“In total, IADA dealers accounted for 1011 transactions in the April-December time period, not counting preowned aircraft sales handled by our OEM members,” said IADA Executive Director Wayne Starling. “Our dealers registered 285 sales in December alone, by far the most active month of the year and double any other COVID-19 impacted month.”

Looking towards 2021, IADA dealers ended the year by putting another 74 aircraft “under contract” in December. Strikingly, dealers reported that only 36 of the 554 transactions closed in the fourth quarter involved lowered prices. Marking a return to stabilized prices, that contrasts with 45 deals that involved aircraft with lowered prices on sales of 174 aircraft in the second quarter, as the industry began recovery from the unprecedented plunge in activity during March.

“While it is way too early to say the industry has rebounded completely, as the pandemic is still raging, the activity in the preowned aircraft marketplace is certainly trending upwards across all of our dealers,” Starling said.

The organization’s marketing arm, www.AircraftExchange.com, handled 638 transactions for aircraft that were listed exclusively by IADA dealers, worth more than $5 billion during the year of of 2020. This occurred despite the most volatile sales environment in the aviation industry’s history due to the ongoing pandemic. Today, the organization exclusively lists more than 500 business aircraft for sale on its site. The aircraft range from turboprops to VVIP long range business jets. 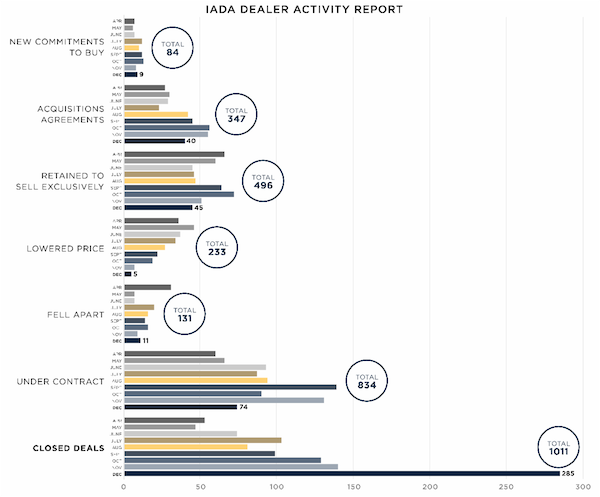