Reducing greenhouse gas emissions has been a key subject in global sustainable development. "To reach carbon peak by 2030 and achieve carbon neutrality by 2060" is China’s solemn commitment to the international community. Sino Jet promptly responds to the nation's calling for the carbon goals, is one of the first companies in the business jet sector to strategise a "green aviation" development. Sino Jet was the first in China to operate a "carbon neutral" business jet flight on April 22 this year, promoting more research and inspiring the industry to explore and develop in carbon emission reduction. 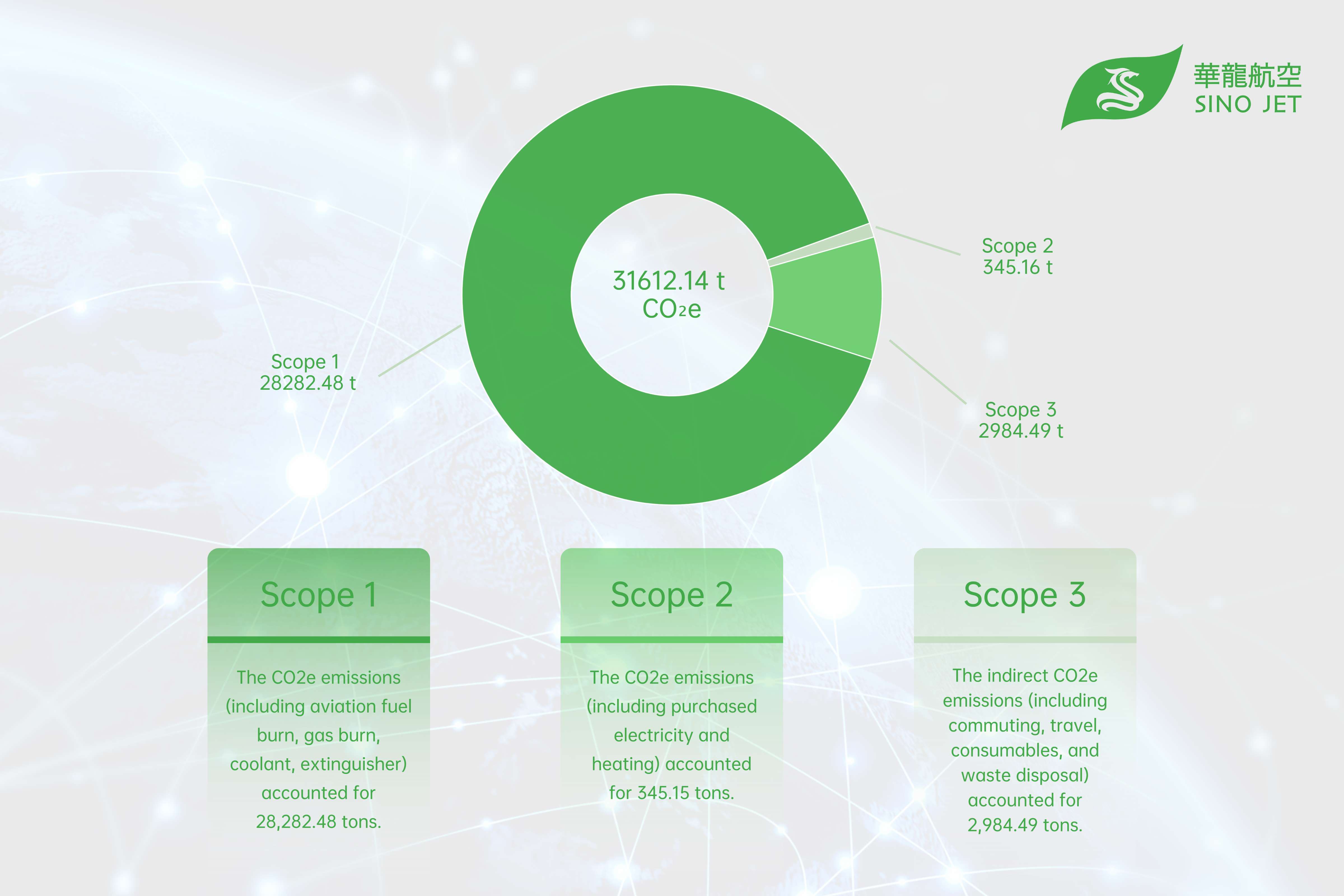 In accordance with ISO 14064-1 and with reference to the "Greenhouse Gas Protocol Corporate Accounting and Reporting Standard" set out by the World Resources Institute, Sino Jet conducted a comprehensive investigation and quantification of the company's carbon emissions base on its operations in 2021. The investigation scope widely covered aircraft trading, aircraft management, charter flights, ground handling services and fixed-base operator (FBO) management. The total Greenhouse Gas (GHG) emissions from the chain of business jet services provided by Sino Jet was found to be 31,612.14 tons, of which Scope 1 emissions (including aviation fuel burn, gas burn, coolant, extinguisher) accounted for 28,282.48 tons and Scope 2 emissions (including purchased electricity and heating) accounted for 345.15 tons and Scope 3 indirect emissions (including commuting, travel, consumables, and waste disposal) accounted for 2,984.49 tons. 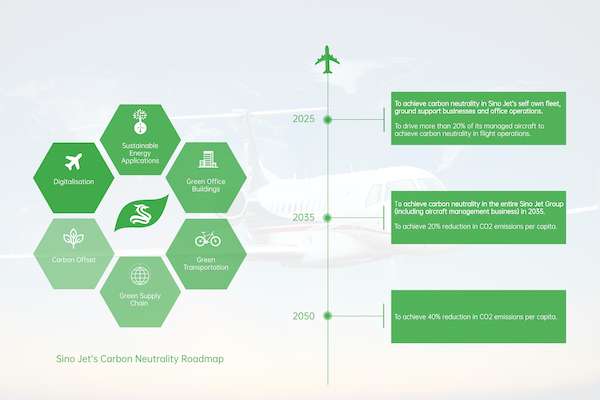 On the basis of the findings of the Greenhouse Gas (GHG) Emissions investigation, Sino Jet has formulated a scientific path to achieve its carbon neutrality goal, and plans to follow the proposition of “focus on energy conservation and emission reduction, then supplement by carbon offsets", to improve existing green practices by digitalisation, sustainable energy applications, green office buildings, green transportation, green supply chain and carbon offset. From these six aspects, Sino Jet aims to achieve its carbon neutrality goals as scheduled.

To expediate the accomplishment of carbon neutrality, Sino Jet’s primary goal is to achieve neutrality in operating its self-own aircraft. Sino Jet has already begun with the development of a carbon management system that is suitable for business jet operations, fully integrable with its information management system, to create a quantifiable, traceable green aircraft operation and to achieve neutrality its self-own fleet operations, ground services, and office operations in 2025. In terms of carbon emission per capita within the company, Sino Jet targets a 20% reduction in 2035 and a 40% reduction in 2050.

Currently, very few airports in the world supply sustainable aviation fuel (SAF) and most of these airports are located in Europe and North America. Civil Aviation Administration of China (CAAC) sets out a roadmap for green development in January 2022 to seek green and low-carbon development. China plans to significantly increase the use of SAF in 2030. In light of this roadmap, Sino Jet has reached an agreement with China National Aviation Fuel Group Limited (CNAF) to be the pilot client for SAF at all domestic airport. Sino Jet also pledges to opt for SAF wherever possible.