Skyports, developer and operator of vertiports for electric vertical take-off and landing aircraft, has acquired a heliport, previously known as the Falcon Heliport, which is located in East London and only minutes from Canary Wharf financial district. It is one of only two operational heliports in London.

The deal forms part of Skyports’ acquisition strategy of securing, developing and operating a network of vertiports to enable the transition to emissions-free aviation in the UK. Skyports foresees the launch of fully electric commercial air taxis in the UK within the next few years and the heliport site will form an integral part of Skyports’ ground infrastructure network.

The heliport will continue its existing operations under the new name of Skyports London Heliport , serving the existing helicopter market until mid-2020s, by which point Skyports anticipates repurposing and equipping the heliport with facilities required to also enable the operation of electric eVTOL aircraft. Skyports has already started using the heliport for testing of its vertiport systems.

The transition to eVTOL aircraft, which are quieter, greener and cheaper than traditional helicopters, will unlock new routes from the heliport to other parts of London and the rest of the UK. Passengers travelling from Canary Wharf will be able to hop on an eVTOL and reach most of London’s airports within 20 minutes or fly to Bristol in under 50 minutes.

Damian Kysely, Head of Europe & Middle East at Skyports, commented: “This is an exciting moment for Skyports. The acquisition demonstrates our ambition to deliver a network of operational landing sites for eVTOLs and our commitment to making the UK a leader in decarbonisation of domestic aviation. The heliport also provides us with an important live operating environment in which we can safely develop and test our vertiport systems, collect operational data and mature our vertiport technologies.” 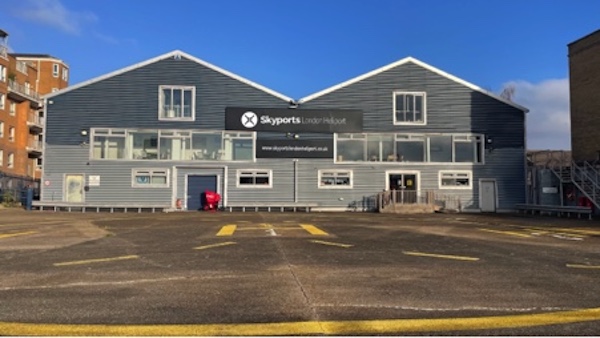