Two more customers have been added to the list of U.S.-based Kodiak 100 owners/operators, underscoring the utility aircraft’s ability to perform a full range of applications – as well as Daher’s commitment to continuous improvement.

In March, Daher’s delivery of the first Kodiak 100 Series III aircraft marked the official launch of this latest version, which incorporates enhancements and standard features for improved flight safety, greater cabin comfort, augmented operational capabilities from both unimproved strips and on water with floats, as well as upgraded quality and more comprehensive maintenance coverage.

Offered on Series III aircraft is the eight-seat Executive Edition cabin with club-type seating for passengers, air conditioning with controls for both the cockpit and cabin zones, as well as an increased oxygen capacity. Enhanced-quality exterior paint is an option, provided with an extended three-year warranty.

The excellent Kodiak versatility is further improved with incorporation of the largest tire size available for this aircraft (29 inches), a higher landing weight of 7,255 lb., and a lower zero-fuel weight that allows more payload – especially on shorter missions.

All Kodiak 100 Series III aircraft are float-ready for seaplane operations, and the standard pitch latch propeller allows for easy maneuvering at the dock by enabling the propeller to stay in a fine pitch during engine shutdown – giving greater control and safety on the water. Additionally, skin gap fillet sealant is the fifth step in an industry-leading anti-corrosion process, providing protection especially in high salinity environments.

The standard package for Kodiak 100 Series III aircraft is completed with the best-in-class, all-inclusive four-year Kodiak Care maintenance program, which covers scheduled maintenance up to the fourth annual inspection or a total flight time of 1,000 hours – whichever comes first. Also included is Pratt & Whitney Canada’s Gold-level ESP™ Maintenance Program for the PT6A-34 turboprop engine, along with one year of CAMP Systems maintenance tracking and a year’s subscription for Garmin’s NavData electronic database.

For 25 years, Airborne Flying Service has operated as an air charter company based in Hot Springs, Arkansas with an air medical operations location in Little Rock, Arkansas since 2016.

JB Kirk, Airborne Flying Service’s president, said the benefits of the Kodiak 100 in an air ambulance role include the aircraft’s operational cost effectiveness, its large loading door, an airframe that is lower to the ground, and the state-of-the art cockpit with integrated flight deck.

“Safety is the most important element of every flight we perform, and the Kodiak 100 fully meets our needs – especially at night and in bad weather – because it is simple and easy to use,” Kirk explained. “Additionally, the PT6A-34 engine is a ‘bulletproof’ powerplant based on its proven reliability.”

In launching operations with the Kodiak 100, Airborne Flying Service is making the aircraft interoperable with ground ambulances through its development of a roll-on/roll-off capability. This avoids the necessity of moving a patient on/off a stretcher during transfers, while reducing the time a patient is exposed during loading/unloading between the ambulance and aircraft. It also facilitates the handling of heavier-weight patients. Kirk noted that transporting bariatric patients in the past has been challenging for the air medical transport industry because of smaller doors and less capable equipment.

“The airplane’s ergonomics are exactly what we need for emergency services,” Kirk concluded. “While its cross-section and payload are very similar to our twin-engine aircraft, the Kodiak 100’s acquisition and operating costs are much more attractive than a twin, and its lower landing speed opens many more runways for our services.” 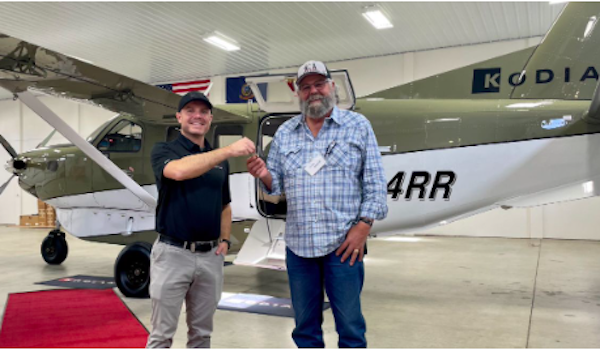 Loading comments for The Kodiak owner/operators ranks grows with two new customers from different ends of the spectrum...