Dr. John C. Taylor, OBE, owner of a Daher TBM 910 very fast turboprop aircraft, received a special present for his birthday last month: a formation flight with one of World War II’s most renowned fighter aircraft: the Spitfire Mark 1a.

This unique photo shoot was arranged by David Fabry, the Chief Executive Officer of Flying Smart –Daher’s TBM authorized distributor for U.K. and Ireland, who sold the TBM 910 to Dr. Taylor earlier this year. The legendary Royal Air Force (RAF) warbird belongs to the Imperial War Museum, based at Duxford Airfield in the U.K.

The birthday formation flight underscored Dr. Taylor’s family connection with the Spitfire and the RAF. His father, Eric, spent much of his after-work hours during World War II helping young men learn the basics of airmanship by flying gliders – with the most skilled pilots going on to fly Spitfires. Eric Taylor’s daytime job was developing the Taylor electrically-heated flight suit, gloves and boots for crews of bomber aircraft, particularly those aboard long-distance Lancaster bombers on which the gunners had to survive in their turrets for hours at 25,000 ft in very low temperatures.

Dr. Taylor maintained the family relationship with aviation by soloing in a glider at the age of 16. Having continued to fly for 65 years, he has logged a total of more than 5,000 flight hours and is an instrument-rated pilot.


“I have flown almost 2,000 hours in TBMs,” Dr. Taylor explained. “It is the ideal business aircraft to fly around Europe, with occasional trips to – and around – America. The aircraft’s economy, reliability, speed and range are legendary, but I believe the main advantage is being able to use the smaller airports that are not subject to delays so prevalent for business travelers today in using scheduled flights.”

“We join with David Fabry and Flying Smart in wishing a happy birthday to Dr. Taylor, an accomplished TBM pilot, with this unique flight that also highlighted the exceptional performance of our TBM aircraft,” commented Nicolas Chabbert, Senior Vice President of Daher’s Airplane Business Unit. “For the photo mission, the crews benefitted from the unique characteristics of the Daher TBM 910: it can fly as fast as the famous Spitfire fighter, while also performing maneuvers at low speeds to follow the camera chase aircraft.”

Dr. John C. Taylor, OBE, owner-pilot of a brand new TBM 910, is one of the most faithful TBM customers. He has had 5 TBMs to date, taking delivery of his first TBM 700A in 1991, followed by a TBM 700C2, a TBM 850, a TBM 900 and in May 2017, his current TBM 910. Dr. Taylor is an inventor, a retired CEO of Strix Limited, a graduate of Natural Sciences from Corpus Christi College, Cambridge University, a Doctor of Science and visiting Professor at Durham University, and a Doctor of Engineering at the University of Manchester Institute of Science and Technology. Dr. Taylor is also a renowned inventor with some 440 patents in his own name, mostly known for his design of the 3600 cordless base and automatic switch off on boiling for electric kettles. As a philanthropist, he has contributed to science and education by funding the Corpus Christi student library and its famous Corpus Chronophage Clock that he designed. His latest benefaction is the endowment in perpetuity of a Professorship of Innovation in the University of Cambridge.

“It was great to be in the cockpit of a TBM 910 with Dr. Taylor on this special occasion of his birthday celebration formation flight, after having been his copilot on his 27th Atlantic crossing last summer.” stated Flying Smart’s David Fabry. “It was a true privilege to have the Spitfire Mark 1a on our wing for a glorious afternoon.” 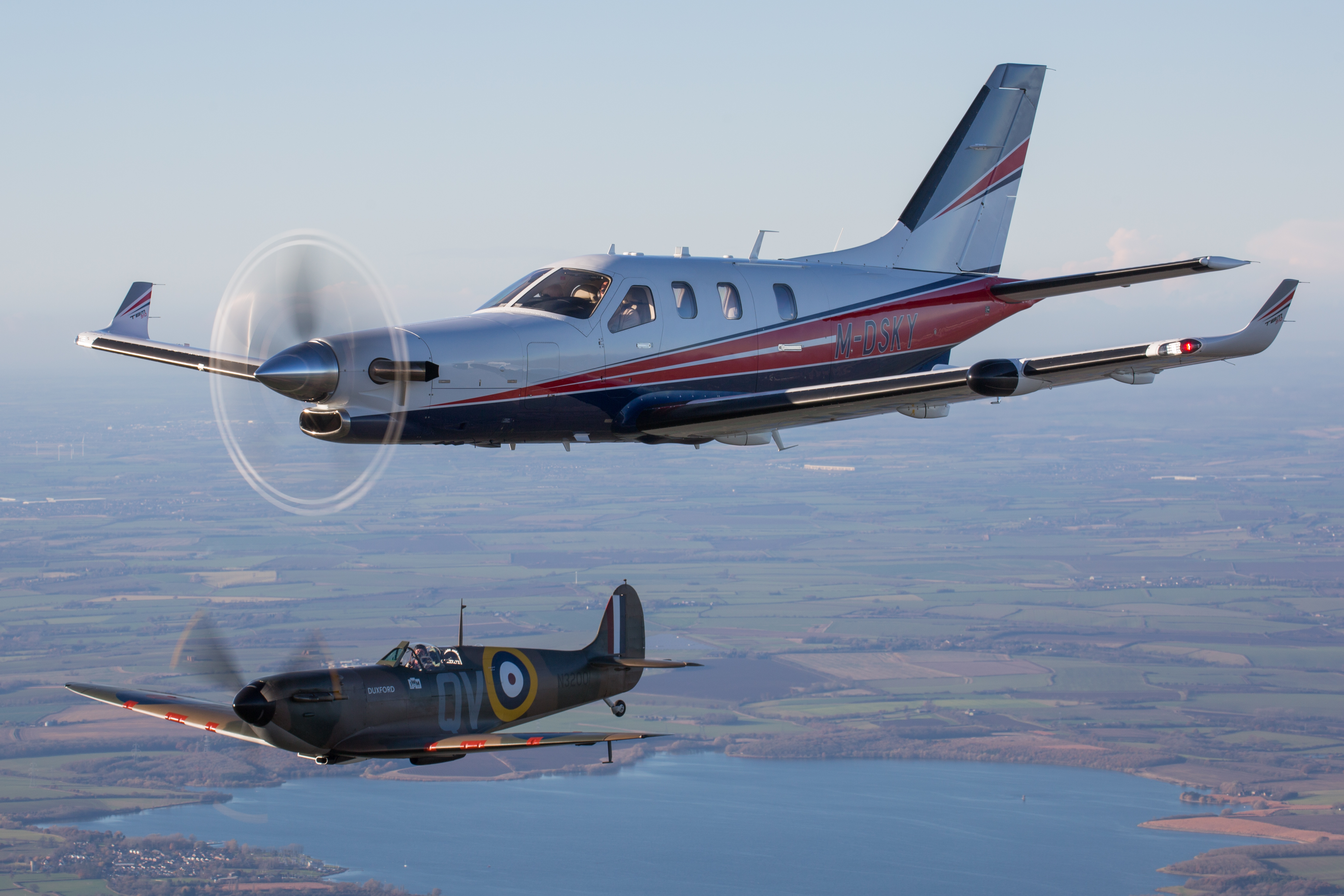