Like the AW139s, also the AW169s will benefit from the support solutions provided locally by AgustaWestland Aviation Services LLC, an Abu Dhabi Aviation (ADA) and Leonardo joint venture delivering thorough support and maintenance services in the region. Operating both the AW139 and AW169 ADA will also add to the range of customers worldwide who are benefitting from the unique advantages of the AW Family of new generation helicopter models. 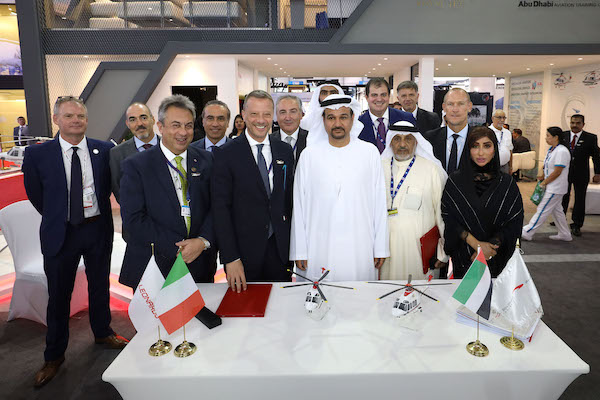 “This agreement has come to support the oil and gas industry inside and outside the UAE and to satisfy the transport, air-ambulance and other needs. It is in line with the Company’s strategy to expand its fleet of new generation aircraft in order to meet its customers’ needs, in light of the expected high demand in 2020" said H.E. Nader Ahmed Al Hammadi, Chairman of Abu Dhabi Aviation.

Alessandro Profumo, Leonardo CEO, said: “We’re honoured our long established leading partner Abu Dhabi Aviation has now decided to add the AW169 to their fleet, confirming their trust in our technology to provide a major contribution to their future success.”

The new generation twin-engine light multi-role helicopter, the 4.8 ton AW169, has been designed in response to the growing market demand for an aircraft that delivers high performance, meets all the latest safety standards and has multi-role capabilities. Its high performance and state-of-the-art technology make it just the best choice for operations in high temperature conditions both onshore and offshore. AW169 has become the best-selling helicopter in its class for a wide range of operations including air transport, air ambulance and VVIP transport. Over 200 AW169s have been ordered by customers worldwide to date.

Abu Dhabi Aviation provides aviation offshore oil field support and other services worldwide and in particular for the oil and gas production companies inside and outside the Emirate of Abu Dhabi. The Company also provides air ambulance and Search and Rescue services.

Among the most significant services provided by Abu Dhabi Aviation are the air ambulance and medical evacuation services provided to various entities. The Company has developed its services using a fleet of modern aircraft to satisfy work requirements and its adopted safety strategy.

*          Multiple logistic support services to the police and the army.

The Company has continued to expand its business into other markets as well, as it holds 50% of Royal Jet, the world's largest award-winning commercial operator of Boeing Business Jets. In addition to its Boeing Business Jets fleet, Royal Jet operates a varied fleet of other business jet aircrafts to meet the needs of its elite clientele.

The said helicopter models are widely use in the Middle East allowing for more efficient local management.

Key elements in all the Company's decisional and operational processes are its Quality and Safety Management philosophy and systems.

ADA has held the prestigious Helicopter Association International's Platinum Award of Safety since 2006. The Company exceeded 1,000,000 helicopter flight hours with an enviable safety record - especially given the extremely high number of offshore takeoffs and landings - each offshore helicopter averages seven cycles per hour. This level of activity demands the highest caliber of flight and maintenance crews supported by a noteworthy quality assurance and training regime.

The key to Abu Dhabi Aviation’s success and continuity lies in its vision: “One team, propelling ADA safely and profitably into the future”. The Company’s values comprise: Safety, Quality, Customer Focus, Teamwork, Integrity, Ethics and Sustainability.