Coming soon to your own living room - an airshow with a difference!  Scheduled for June 20th, the Armchair Airshow 2020 promises live pilot interviews, walk-throughs and never before seen air-display and in-cockpit footage. While final details of this exclusive online broadcast event are still under wraps, highlights will include footage from a number of aircraft including a Spitfire and Concorde as well as performances from The Red Arrows, The SR-71 Blackbird and The Blades aerobatic team.

A family-friendly event, with insight and commentary that will appeal to aviation experts as well, The Armchair Airshow will broadcast between 2pm and 6pm on June 20th, via the Aerobility YouTube Channel and Facebook Live. It will be free to watch.

Says Mike Miller Smith, CEO of disabled flying charity Aerobility which is organising the event: “Enabling anyone with any disability to fly is at the heart of what we do. It drives a focus on ‘if I can fly a plane, what else can I do? Covid 19 has removed our ability to do this as we normally would with flying, so we have responded with a programme of online activity called Virtual Aerobility. The Armchair Airshow builds on this and brings the exhilaration of airshows to everyone during this time of extended isolation”

With support from companies such as Hayward Aviation coming forward too, the sponsorship and charitable donations raised from the Armchair Airshow will support disabled flying in the UK.

Behind the event is a veritable Who’s Who of the aviation industry, including the following:

George Bacon MBE - Probably best known by airshow regulars as the calming voice of aviation events up and down the British Isles, George ‘Smokey’ Bacon is also a display pilot, CEO of BADA and a flying display director. He was awarded an MBE for support to NATO operations in Kosovo.

Mike Ling MBE – Renowned as the Red Arrows' longest serving pilot, Squadron Leader Mike Ling retired from the Royal Air Force after 21 years in April 2019. He has since joined the Blades, an aerobatic display team of former Red Arrow pilots.

Charles Skiera – Charles is Director of R5 Air Displays and is executive of the European Airshow Council, the representative body for the airshow industry and community in Europe. He is also a member of the British Air Display Association Committee. His flying experience started at the age 12 and he has a particular interest in gliding and light aircraft.

Iain Campbell – Iain is the Managing Director of PlanesTV. Providing coverage of airshows in the UK and across Europe, PlanesTV has filmed over 300 aircraft types and has one of the biggest aviation film archives in the UK.

Jon Windover – a trustee with disabled flying charity Aerobility for 15 years, Jon managed the 'Bader's Bus Company display team' - the world's first all-disabled air display team. When not volunteering for Aerobility, Jon is a Business Development Director for an Aerospace and Defence company.

Chris Janssens – Chris has been involved with various airshows including the Wings and Wheels Military History show held at the NATO reserve airfield in Ursel, Belgium. He publishes the website, Wheels Up!

Mike Miller-Smith MBE – The CEO of Aerobility, Mike started his career training as a commercial pilot. After becoming disabled in his twenties, he subsequently entered the pharmaceutical and IT industries, holding senior marketing and management positions in global companies. He was awarded his MBE for services to disability within aviation. 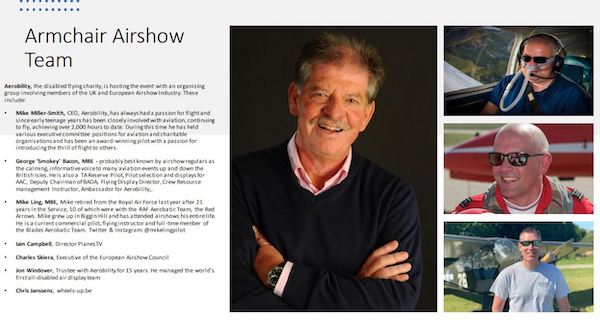