“Answering tomorrow’s challenges” is more than just a trade fair motto for MTU Aero Engines. These words reflect the company’s commitment to finding solutions to tackle the challenges the aviation industry will be facing down the road. At this year’s International Paris Air Show (June 17 to 23), Germany’s leading engine manufacturer will present truly pioneering ideas and concepts. The company’s objectives are to make military propulsion systems even more powerful and to improve the fuel consumption and environmental compatibility of commercial engines. MTU not only wants to enhance the next generation of commercial engines, but has set its sights also on the time after 2050.

At its 300-square-meter booth No C254 in Hall 2A, MTU will showcase technological highlights from its three business segments – commercial engines, military engines and maintenance. The central attraction at MTU’s booth is its new technology exhibit: Air show visitors can learn about MTU’s key technologies for the next generation of geared turbofan engines via an 85-inch screen moving along a stylized engine. The focus is placed on the two components MTU contributes to the geared turbofan, the high-pressure compressor and the high-speed low-pressure turbine. The new technologies are expected to be on board commercial aircraft by the 2030s. Also on MTU’s air show agenda are recurring aviation industry topics, such as sustainable, renewable fuels (electricity-based fuels or e-fuels), which can be used as from now, all-electric or hybrid-electric flight, as well as the use of hydrogen fuel, that is fuel cells. MTU’s experts are pressing ahead with the development of the requisite technologies and present their ideas and concepts at the air show. 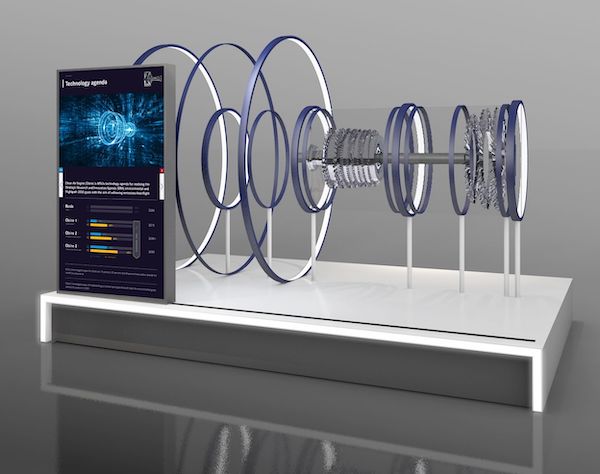 The German engine manufacturer will also present revolutionary aircraft propulsion concepts for the year 2050 and after. These are intended to help achieve the ambitious environmental goals of Flightpath 2050 and pave the way towards emission-free air traffic. The two innovative approaches MTU is pursuing go far beyond conventional technologies: The composite cycle engine concept combines the benefits of a turbofan and piston engine, whereas the steam injected gas turbine (STIG) cycle concept provides for a steam process within the gas turbine cycle to recover the heat in the exhaust gas jet by producing steam and injecting it into the gas turbine.

Visitors to MTU’s booth also get an opportunity to find out what an essential role digitalization plays for Germany’s leading engine manufacturer. MTU uses a simulation screen to demonstrate where virtual development can help make processes faster, more efficient and more cost-effective und how important simulations will be for development, production and certification in the future.

The Munich-based company will also exhibit components from its current production, among them a full-size GEnx turbine center frame. In addition, new materials and innovative component designs made possible by additive manufacturing methods are presented in a glass display case.

MTU has a lot to offer in the military sector as well: On display are the EJ200 engine powering the Eurofighter and GE Aviation’s T408 engine for the Sikorsky CH53-K heavy-lift helicopter. Joining forces with its partner Safran Aircraft Engines, MTU will take on a leading role in the development of a new engine for a future European fighter aircraft. In an interactive exhibit, Germany’s leading engine manufacturer demonstrates just how important a Next European Fighter Engine (NEFE) will be for achieving the performance levels and capabilities expected of the next generation of fighter aircraft.

MTU Maintenance will present its new service portfolio, dubbed MTUPlusIntelligent Solutions, which has been conceived to fulfil the exact and specific needs of customers. It is aimed at operators, who increasingly require tailor-made solutions across the lifecycle of their engines in order to control and optimize cost, and at asset owners and lessors, for whom residual value and cost of ownership are key. The portfolio comprises four highly-tailored solutions, PERFORMPlus, SAVEPlus, VALUEPlusand MOVEPlus, and the SERVICEPlusservices cluster for single and ad-hoc requests.

MTU’s trade show appearance is rounded off by the presentation of the futurologists from the Munich-based Bauhaus Luftfahrt think tank. They will be showcasing their composite cycle engine concept and explain how piston engines can enhance thermal efficiency by increasing pressures and temperatures in the core engine to higher levels than ever before. Assuming an entry into service in the year 2050 and further technical improvements to the airframe, the experts believe that fuel burn reductions by 11 percent as compared with the expected 2050 GTF state-of-the-art, or up to 50 percent relative to the year-2000 turbofan technology can be achieved.