A Swearingen SA227-AT Expediter, registered N577MX, was destroyed after impacting terrain during takeoff from Malta-Luqa Airport. All five crew members sustained fatal injuries.
The aircraft took off from runway 13 and lost height in right hand turn and impacted terrain just past the airport perimeter fence and burst into flames.
The Expediter operated on a surveillance operation for the French customs.

The Fairchild Metroliner Mark III plane crashed near the runway soon after take-off and subsequently burst into flames, with an eyewitness telling Times of Malta they saw the plane suddenly tip onto its right side before it "went straight down into the ground."

All five crew members were French, the government confirmed in an official statement, and the remains of all five members have been found. Nobody aboard the plane survived the crash.

Several inquiries are underway, with the government adding that official information, footage and eyewitnesses had all confirmed that there was no explosion prior to impact. 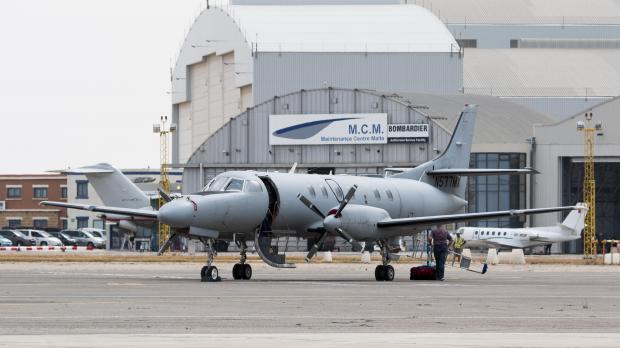 Mater Dei hospital staff were immediately told to be in major incident mode, and Malta International Airport shut down for four hours following the crash. Most Malta-bound flights were diverted to Sicily during that time.

In a statement issued at 11.30am, MIA said that it had reopened its aerodrome, allowing flights to take off and land, although it warned passengers that it would take some time for the schedule to return to normal.

Air Malta expressed its regret at the incident and said passengers affected by delays could rebook their flight or seek a full refund by calling on +356 21662211.

The twin-prop US-built and registered plane was heading for Libya, sources said. It was leased to the Luxembourg arm of Canadian firm CAE Aviation, which describes itself on its website as a "European leader in intelligence surveillance and reconnaissance services."

In a statement, the government said the flight was part of a French customs surveillance operation "which had been taking place for the past five months."

The operation was tasked with tracing illicit trafficking routes "of all sorts, including human and drug trafficking," the government statement read.

"The ... flight was registered with Malta Air Traffic Services as a local flight and was to return to Malta within hours without landing in third countries," it added.

But that claim was cast into doubt by subsequent statements issued by French authorities.

And in a tweet, the French Customs department said no customs officials were aboard the plane.