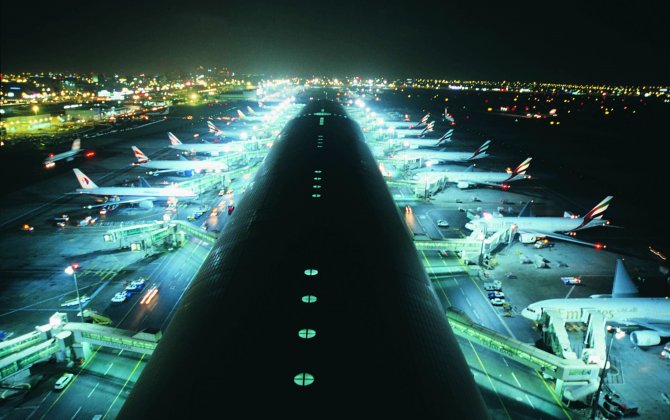 Dubai Airports beat shortlisted Changi, Amsterdam and Frankfurt to scoop an award for the best airport with more than 50 million passengers at the World Routes Development Forum being held in Durban, South Africa.

The Dubai Airports team (pictured above) were presented with their award during last night's gala partyt which took place in the shadow of Moses Mabhiba Stadium, one of Durban’s most famous landmarks.

The awards, which are voted exclusively by airlines, are split into five categories comprising of four airport categories, split by size and a destination category for the best destination marketing campaign by a tourism authority.

Tourism Ireland was announced as the overall winner of the World Routes Awards 2015
Created in 1997 to recognise excellence in airport marketing as rewarded by airlines, the annual Routes awards provide the airline community with the chance to have their say as to which airport they think provides the best overall marketing services to them.
“We’re delighted to mark the achievements of all of our nominated airports and destinations in our annual World Routes Marketing Awards. Year-on-year we are impressed by the calibre of the submissions,” said Katie Bland, director Routes.
Halifax Stanfield International Airport was honoured in the Under 4m Passengers category; Prague Airport in the 4m-20m Passengers category and Copenhagen Airports in the 20m-50m passengers category.
Tourism Ireland was the winner in the destination marketing category and was named as the overall World Routes marketing award winner.

London City Airport plans to restart commercial operations from the end of June. With more details to be announced alongside airline partners shortly, it is expected that domestic services to key...

Following the temporary suspension of flights on 28 March 2020 as part of the restrictions to combat the Covid-19 pandemic, Pegasus Airlines relaunched domestic flights on 1 June 2020 and as of today,...

Wizz Air has reopened its Belgrade base on 1 June 2020 with routes to some of the most popular destinations in Europe: Karlsruhe/Baden-Baden, Hanover, Memmingen/Munich West, Dortmund (G...