Get ready to MEBAA Show Morocco!

Are you ready for the biggest business aviation event in Morocco? if not yet, take a look at what'up at MEBAA Show Morocco and book your ticket to attend!

Let's meet 25-26 September at Marrakech Menara Airport! The 2019 edition will host an impressive percentage of new exhibitors alongside those who have been with MEBAA Show Morocco since its inception in 2015.

“As stated by his Majesty Mohammed VI King of Morocco, Morocco and Africa are big markets with huge potential,” says Khalid Serghat, CEO of Sarah Airways. The new company, which launched in 2018, has chosen the MEBAA Show Morocco to promote its new aircraft, a Hawker 900XP, that it is adding “range, comfort and luxury to our fleet.” Serghat continued, “Morocco is situated geographically in a strategic position serving the continent [Africa], Europe and the Middle East.”

It’s this strategic location that attracts Milano Prime to participate in the event each time it takes place. “This is our third year exhibiting at MEBAA Show Morocco,” confirmed Chiara Dorigotti, CEO of Milano Prime. The company has recently opened a new business and general aviation terminal at Milan Malpensa and sees it as the perfect complement to Morocco’s location as a link to Europe. 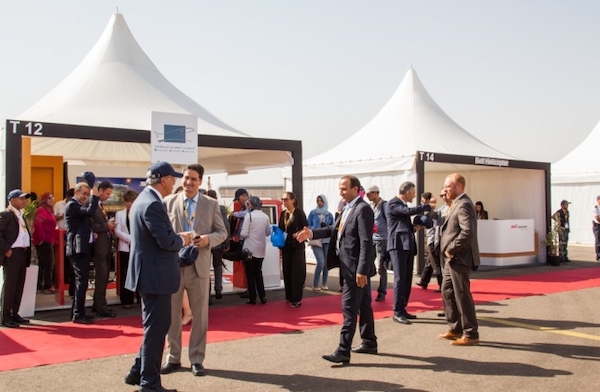 Kadri Muhaddin, Group Executive Chairman and CEO of AMAC Aerospace, agrees Morocco is a good launch pad for the North African side of the growing African market. He confirms, “We will be exhibiting at MEBAA Show Morocco to demonstrate that business aviation is accessible – to open people’s eyes and educate them about AMAC’s capabilities and services.” Among these capabilities are MRO, completion and refurbishment services, charter and brokerage services and engineering expertise.

Also new to the event this year will be Carthage Sky Services, whose portfolio includes trip planning and supervision; VIP and VVIP flights; catering and fuelling among others. Montasser Channoufi, CEO of Carthage Sky Services says that the growth in infrastructure, particularly in Moroccan airports, plus interest in the region from operators and industry players makes it a key market for them. He adds that MEBAA Morocco also helps to address challenges in the industry from this growth, such as a requirement for more dedicated FBOs.

“An increase in the number of private jets in Morocco has seen an increased demand for excusive FBO terminals and private flight support services,” agrees Adel Mardini, CEO of Jetex. “Previously these services were contracted to commercial airlines.” Jetex, however, sees this changing as the industry matures. “We’re incredibly positive about the Morocco market which is demonstrated by our network of four terminals in Agadir, Rabat, Marrakech and Casablanca,” Mardini continues. He adds, “As well as being a strategic location between Europe and Africa, it’s also becoming a new favourite with travellers with the opening of a range of boutique and luxury resorts. We are looking forward to bringing once-in-a-lifetime experiences to the Moroccan market.”

Other industry leaders exhibiting at the MEBAA Show Morocco will be Dassault, Bell and Swissport Aviation, and the event will feature a static display of the latest business aircraft.

The business jet market is expected by Mordor Intelligence to reach $19.95bn globally by 2024; while the Middle East and Africa business jet market in particular is evolving with rising investments on general aviation airport infrastructures.  In addition, the growth in number of high net worth individuals in the region is turning the market into a lucrative one, for both business jet service providers and OEMs. As a result, the MENA business jet market is anticipated to register the highest CAGR during the forecast period.

“I’m thrilled to see the excitement from our exhibitors for the third edition of the MEBAA Show Morocco,” says Ali Alnaqbi, Founding & Executive Chairman of the Middle East & North Africa Business Aviation Association (MEBAA). “The new exhibitors who are keen to take advantage of the region’s opportunities, joining some who return each edition, demonstrates the potential of the industry. Combined with the government support behind aviation in Morocco, it’s clear that there is still a lot of growth to come.”

Loading comments for Get ready to MEBAA Show Morocco! ...