In the Spring of 1945 a Spitfire aircraft crashed on the Russian tundra during a dogfight. Her incredible story is captivated in the RJM mechanical timepiece. The RJM is the worlds' first timepiece that combines authentic salvaged Spitfire aircraft material with both the design of the aircraft itself and the watches worn by the pilots of the WW2 era – making the RJM utterly unique in design and limited in nature.

The core concept of REC Watches - Recover Recycle Reclaim - has always been pivotal in our approach towards watchmaking, and our mission with any new timepiece is to capture both the design, era, and story behind the salvaged icon; creating a modern timepiece interpretation of a historical icon.

The RJM was no exception, and to accomplish this mission, we teamed up once again with world-renowned Swiss design agency, StudioDivine.

The RJM crown guard design incorporates part of what made the Spitfire aircraft such an aerodynamic masterpiece – the elliptical wing shape and wing structure. It is decorated with the internal spars and ribs that ensured lightweight and strength to the wing construction of the spitfire aircraft.

The crown itself takes inspiration from the conical nose-tip, including indents where you would find the propellers, which also allowed for a diamond crown design typical for both modern and vintage pilot-inspired timepieces.

In contrast, we wanted the dial design of the RJM to capture both the experience of sitting inside a Spitfire aircraft, but also to take inspiration from watches worn by RAF pilots of that era.

To be specific, we wanted to create a modern interpretation of the so-called Dirty Dozen watches, which in watch collecting circles is a name given to a group of 12 watches commissioned by the British Ministry of Defense and worn by British soldiers during the Second World War. Finally, we wanted the battle scarred Spitfire aluminum to take center stage in the design, adding depth and uniqueness to every timepiece.

REC Watches – Recycling salvaged icons
Petrol heads and watch fanatics to the bone, our ambition with REC Watches is to transform those passions into truly unique timepieces. 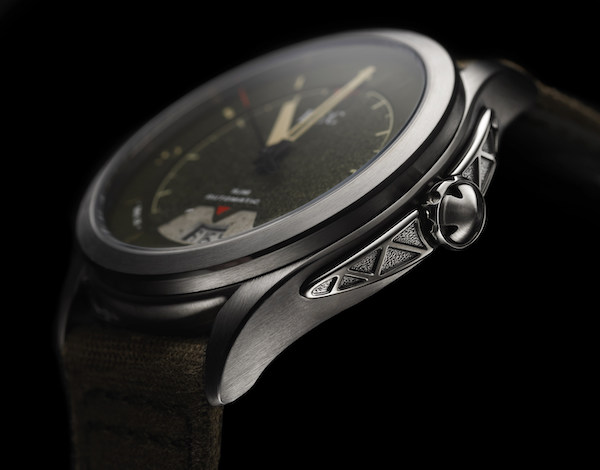 The RJM has a piece of aluminum cut directly from a Spitfire aircraft and subtle design references to the iconic aircraft. Showcased here in the crown guard as well as the crown itself.