More than 100 aircraft are expected at Thumamah Airport, Riyadh, for the inaugural Saudi International Airshow, making air traffic control critically important. The event, a first of its kind for Saudi Arabia, aims to further connect the aviation and aerospace industries to Saudi Arabia.

SANS, which began operation in July 2016, is responsible for monitoring Saudi Arabia’s airspace and for ensuring its safety and security at all times. SANS is responsible for managing aircraft movements that utilize the Kingdom’s airspace and/or its airports, employing cutting-edge navigation systems and equipment operated by highly qualified personnel on a 24/7 basis. With the large number of private, business and commercial aircraft expected for the Saudi Airshow, SANS will play an important role in managing arrivals, departures and aircraft movements during the event.

SANS’s mission is to create a world-class aviation industry in the Kingdom of Saudi Arabia, which supports the mission of the Saudi Airshow. Participation in the Saudi Airshow allows SANS to showcase how it works to help aviation in Saudi Arabia conform to international standards of air navigation, implement new and proactive methodologies in the field of safety, provide services to its clients of the highest standards, achieve financial and administrative independence, and invest in local talent to not only bolster capabilities but also support the Kingdom's Vision 2030.​

Saudi Air Navigation Services (SANS) is responsible for providing air navigation services in the Kingdom of Saudi Arabia, where the company plays an important and vital role in the security and safety of airspace and aircraft movement within Saudi airspace. 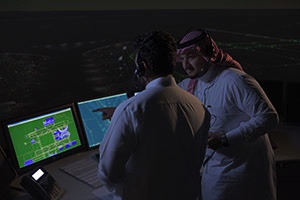