What do you do when you find yourself with an F-14A Tomcat? This is the situation in which MotoArt found themselves earlier this year, when they located an F-14, one that had survived destruction by serving as a prop on various movies and television shows. "We were ecstatic," says MotoArt owner Dave Hall. "We had heard tales about this F-14 for years. It was literally like finding the Holy Grail in our quest to preserve the memory of aviation history with PlaneTags."

MotoArt has been in business for more than twenty years, creating iconic furniture and art pieces out of retired aircraft parts. While they had created many pieces in the past using military plane parts, the F-14 had eluded them until just a few weeks ago. Hall seized the opportunity and began the process of producing F-14 PlaneTags.

"The F-14 is an icon, largely due to its presence in the Top Gun movies," explains Hall, "So we wanted to make sure that we created something worthy of this amazing aircraft, paying tribute to both its life in the military and its cinematic history." The team spent weeks researching the plane's history, discovering that BuNo 159611 had been delivered to the U.S. Navy on September 7,1975, served most of its career with the Navy's Pacific Fleet Replacement Squadron and acted as VF-24's Commanding Officer Richard Vance's F-14 before being struck off charge April 30,1994 at Point Mugu. Although retired from the Navy, BuNo 159611 found another calling in Hollywood. It was used in Surface to Air(1998), JAG (1995–2005), and most recently used by Paramount Pictures for the filming of Top Gun: Maverick.

MotoArt has catalogued nearly 150 aircraft, including the SR-71, F4U Corsair, NASA's Mobile Launch Pad 2 and numerous commercial airliners, by creating collectible PlaneTags from their fuselage skin. MotoArt used the material from BuNo 159611 to create F-14A Tomcat PlaneTags. They will be available at 12pm PDT on May 26, 2022, on planetags.com. Additionally, Hall created a time lapse video of the F-14A's dismantling and destruction. "We did what we could to preserve a little bit of this F-14A Tomcat and make sure it is never forgotten," says Hall.

Since 2001, MotoArt has pioneered the preservation of aviation history and the creation of iconic aviation furniture and art, made from retired aircraft. MotoArt began offering PlaneTags, small aviation collectibles made from the genuine skin of retired aircraft and etched with their registration numbers. To date, MotoArt has preserved and catalogued the history of nearly 150 different aircraft as PlaneTags, releasing a new historic aircraft twice a month. 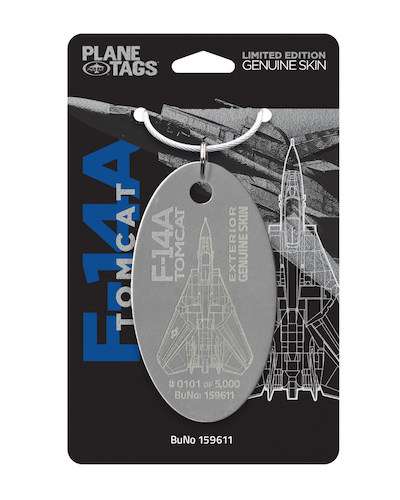