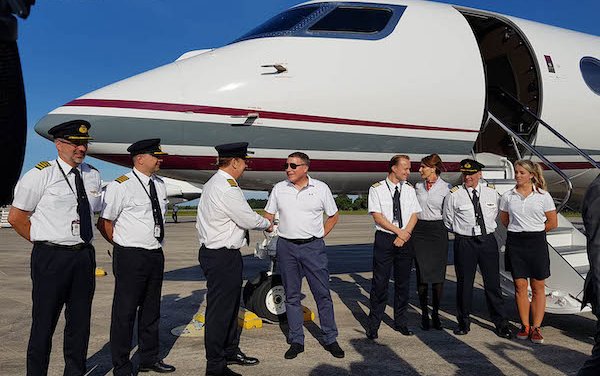 Today, at 12:12:23 UTC the history was made - beating the world record for any aircraft flying over the North and South poles!  Action Aviation Chairman Hamish Harding, Astronaut Terry Virts and crew on board of Qatar Executive Gulfstream G650ER aircraft with record time of the mission of 46 hours, 39 minutes and 38 seconds!

“Our mission, titled One More Orbit, pays homage to the Apollo 11 moon landing achievement, by highlighting how humans push the boundaries of aeronautics,” says Harding. “We did this during the 50th anniversary celebrations of the Apollo 11 moon landing and the 500th anniversary of man first circling the planet. It is our way of paying tribute to the past, the present, and the future of space exploration.”

Qatar Executive EVP Ettore Rodaro says, “We launched on July 9, 2019 at 9:32 a.m. and landed on July 11, 2019 at 8:12 a.m. Our new world record is certified by the Fédération Aéronautique Internationale (FAI) and GUINNESS WORLD RECORDS™. Our Qatar Executive Gulfstream G650 is the fastest ultra-long-range business jet in the world. It has phenomenal range capabilities, industry-leading cabin technology and unparalleled passenger comfort, making it the perfect aircraft to attempt this mission in. It can fly at a faster speed for longer distances than any other jet, with its incredible 7,500 nautical mile (13,890 km) range.” 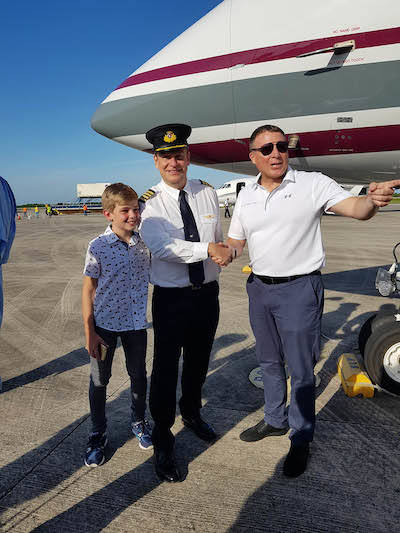 “The mission has utilized the skills of hundreds of talented technicians across the planet and is a testament to what can be achieved when we pull together, even with crazy deadlines and time zone challenges,” says Untitled Executive Producer Jim Evans. “Our production crew covered location action for our documentary in Florida, Chile, Kazakhstan and Mauritius.”

Virts, a former Commander of the International Space Station and filmmaker known for his work on the IMAX film, A Beautiful Planet, is “chronicling the complex preparations and global effort it takes to achieve this historic record. We’ve captured a documentary about the mission, which we hope to share with audiences worldwide in the near future.”

"Rupert Pearce, CEO of Inmarsat, says: “I am delighted that, as Inmarsat celebrates 40 years of innovation and chartering new digital frontiers, we have this amazing opportunity to support the 50th celebration of one of the space industry’s most momentous events; the Apollo 11 moon landing.

"The Carbon Underground is proud to be a partner of this historic mission,” says Larry Kopald, the company’s co-founder and president. “By calling attention to one of humankind’s greatest efforts we remind ourselves of what we are capable of doing. Alleviating the existential threat of climate change by restoring the carbon balance and cycle will take a similar effort, with a similar commitment to speed.”

The One More Orbit team thanks its sponsors, Satcom Direct and inmarsat, for providing the satellite bandwidth and live feed from the aircraft; G-Technology; Action Aviation; and Space Florida. Carbon Underground for their efforts to make this mission carbon negative.

Loading comments for World Circumnavigation Speed Record has been Beaten...

GA Telesis has entered into an agreement with Liebherr-Aerospace for Material Support and Maintenance Services for the E-Jet Family of aircraft. Under this agreement, the Company receives technical su...

The Air Charter Association and the European Business Aviation Association is issuing a warning to the business aviation sector regarding an increase...

He is back - Emirates A380s return to the skies

Emirates will deploy its iconic A380 on its daily Amsterdam service, and add a second daily A380 service to London Heathrow starting from 1 August. This announcement follows the Emirates A380&rsquo...

Bombardier is celebrating the 350th delivery of its beloved and best-selling Challenger 350 business jet, which continues to evolve and solidify its market-leading status. The&nbsp...