CDB Aviation announced the completion of deliveries of a fleet of fifteen new Boeing aircraft to U.S.-based United Airlines Holdings, Inc. The sale and leaseback transaction covered a fleet of two 787-9 Dreamliners and thirteen 737 MAX 8 aircraft, which were delivered between 2020 and 2021.

“We want to thank members of both the United and CDB Aviation teams who collaborated on structuring and expediently executing this complex transaction during a particularly challenging period for the industry,” applauded Peter Goodman, CDB Aviation Chief Marketing Officer.

Pointing to the importance of building a key strategic relationship with the world’s fourth largest airline measured by revenue while further expanding the lessor’s footprint in the Americas, Goodman emphasized the transaction’s role in “supporting United management’s efforts to streamline their fleet and enhance operating economics as they work toward the resumption of sustained, long-term growth.”

The two 787-9s are powered by General Electric GEnx engines and configured in a 257-seat layout with the new Polaris and Premium Plus cabins. As air travel returns, these widebody aircraft are expected to deliver the advantages of lower fuel consumption and efficient economics to open new routes and markets.

The thirteen 737 MAX 8 aircraft, powered by CFM International’s LEAP-1B engines, feature a total of 166 seats in a 2-cabin layout. The MAXs are operated on the carrier’s short- and medium-haul missions, delivering a reduced environmental impact and an enhanced passenger experience as United advances its long-term strategy to further entrench domestic operations.

“The onset of COVID-19 ushered in the most challenging period in the history of the aviation industry,” said Pam Hendry, United’s Vice President and Treasurer. “We are thankful for the partnership we established with CDB Aviation and appreciate their willingness and ability to support United in a meaningful way during this global pandemic.”

“This mandate demonstrated our evolved platform’s robust capabilities and scale as well as our highly competitive position among global lessors,” elaborated Patrick Hannigan, CDB Aviation’s Chief Executive Officer. “Our commercial team remains focused on identifying ways to deliver wide-ranging and innovative solutions to top-tier airlines, such as United, as they navigate their pathways through the air travel sector’s nascent recovery and position their fleets for post-pandemic realities, with operating economics and sustainability top of mind.” 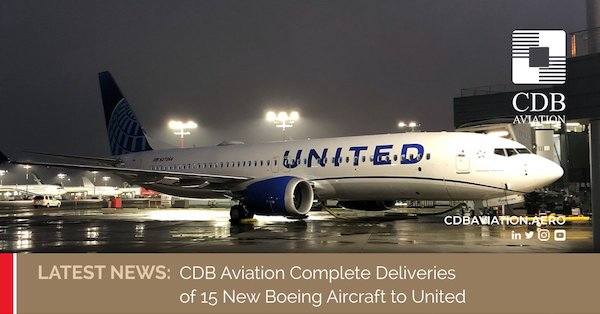