Dassault Aviation inaugurated its new pyrotechnic facilities at its Martignas-sur-Jalle site. The inauguration ceremony was led by Eric Trappier, Chairman and CEO of Dassault Aviation, along with site director Pascal Nibaudeau, and was attended by the general secretary of the prefecture of Nouvelle-Aquitaine and Gironde, Thierry Suquet; the president of the Nouvelle-Aquitaine region, Alain Rousset; the vice president of the Bordeaux Métropole metropolitan area, Alain Anziani; and the mayor of Martignas, Michel Vernejoul. 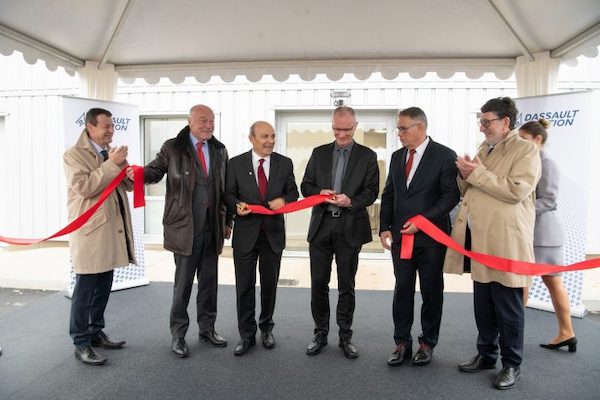 The pyrotechnic activities of Dassault Aviation were previously based in Argenteuil and Poitiers. All of these activities have now been relocated to the new facilities in Martignas:

Aeronautical pyrotechnics is a rare, high-technology specialty. The relocation of this activity to Martignas is fully in line with our transformation plan, ‘Leading our Future,’ launched at the end of 2016. This plan aims to make our company more flexible and competitive, without modifying our DNA. Today’s ceremony marks another successful step in our transformation”, said Eric Trappier.

Pyrotechnics makes a key contribution to the safety of fighter pilots. It allows instantaneous transmission of the ejection signal and ensures that the canopy shatters to allow the ejection seat to pass through. Dassault Aviation has its own expertise in this technology for all its combat aircraft.

Pyrotechnics is used on space launch vehicles for engine ignition and stage and payload fairing separation. It is also used for satellite ejection and for deployment of solar panels and antennas. This is achieved using a variety of computer-controlled pyrotechnic systems (multi-layer relays, valves, transmission lines, etc.). Dassault Aviation deploys these competences on Ariane 5, the Vega rocket, some non-European launchers, and satellites.

Diehl Aerospace expands cooperation with Volocopter for the VoloCity

Volocopter and Diehl Aerospace are further expanding their cooperation. The contract extension provides for the development and production of an optical splitter to complement the flight con...